The battery industry and companies that rely on battery shipments have long said that the problem should be addressed by cracking down on shady battery makers who don't use proper shipping procedures. 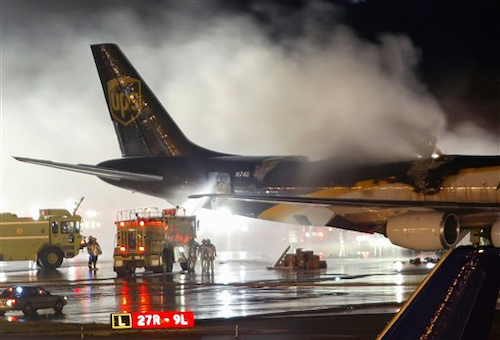 WASHINGTON (AP) — A U.N. aviation panel has rejected a ban on rechargeable battery shipments on passenger airliners despite evidence they can cause explosions and unstoppable, in-flight fires, aviation officials told The Associated Press.

The International Civil Aviation Organization panel on dangerous goods voted 11-7 Wednesday against a ban, said officials who spoke on condition of anonymity because they weren't authorized to speak about the vote publicly. The panel's decision is a recommendation to ICAO's air navigation bureau. It would be unusual for the bureau not to follow the recommendation.

The United States, Russia, Brazil, China and Spain, as well as organizations representing airline pilots and aircraft manufacturers, voted in favor of the ban during the meeting at ICAO's headquarters in Montreal. The Netherlands, Canada, France, Germany, Australia, Italy, United Arab Emirates, South Korea, Japan and the United Kingdom, as well as the International Air Transport Association, a global airline trade group, voted against it.

Billions of the lithium-ion batteries are used to power consumer electronics, ranging from cellphones and laptops to power tools and toothbrushes. Tens of thousands of the batteries are often shipped on a single plane.

U.S. Federal Aviation Administration tests show small quantities of overheated lithium-ion batteries can cause explosions that can disable aircraft fire protection systems. The explosions knock panels off the interior walls of cargo compartments, allowing halon gas — the fire suppression system used in airliners — to escape and dissipate. With no halon, a fire could rage unchecked and lead to the destruction of the plane.

The aviation organization, also called ICAO, is the United Nations agency that sets international aviation standards. It's up to each country to decide whether to follow the standards, but most do.

The battery industry and companies that rely on battery shipments have long said that the problem should be addressed by cracking down on shady battery makers who don't use proper shipping procedures. Battery industry officials contacted by the AP declined to comment.

The panel did agree that the number of batteries that can be shipped without requiring the shipper to inform the airline that the shipment contains batteries should be severely limited. Currently, shippers can bundle as many small packages of batteries as they like into a single, larger container.

However, the change wouldn't prevent unlimited quantities of batteries from being shipped on a single plane if they are declared to the airline and other regulations are followed.

The panel also agreed that batteries offered for shipment should be only 30 percent charged. The lower the charge, the lower the likelihood of a fire.

ICAO sent an alert to airlines this summer urging that they conduct risk assessments on how to safely handle the shipments.

Opponents of the ban argued that the decision on whether to accept battery shipments should be left up to airlines, the officials said. As the result of the U.S. testing, nearly 30 airlines around the world say they no longer accept bulk battery shipments as cargo, but many other airlines continue to accept the shipments.

However, supporters of the ban pointed out that airlines may have trouble accurately assessing the risk posed by battery shipments if they don't know how many batteries they'll have on board. The changes approved by the panel don't limit how many undeclared, small battery packages can be shipped on a single plane, only how many can be packed together into a single shipment.

The FAA tests have raised alarms in aviation circles worldwide about the battery shipments for at least the last two years. But confirmation that only a small quantity of overheating, or short-circuiting, batteries can create an explosion that allows halon to escape was only recently disclosed. Unlike other types of batteries, lithium batteries are more likely to experience short-circuiting if damaged, defective, overcharged or undercharged, or exposed to extreme temperatures. The short-circuiting leads to thermal runaway, a condition of continually escalating temperatures that can cause a fire.

Halon is capable of suppressing flames from a battery, but isn't able to stop the short-circuiting, the FAA tests show. With the flames suppressed, the overheating batteries emit explosive gases, including hydrogen, which can build up inside a shipping container. Once an explosion dislodges the cargo compartment panels and the halon escapes, there is nothing left to suppress flames.

Earlier this year, the International Coordinating Council of Aerospace Industries Associations, led by aircraft makers Boeing and Airbus, urged a ban on bulk battery shipments on passenger airliners, saying that continuing to permit the shipments is "an unacceptable risk." Airliners aren't designed to withstand the intense fires the batteries are capable of creating, the council said.

Despite the extensive testing, it wasn't until earlier this month that the U.S. government said publicly for the first time that the battery shipments are too dangerous to be allowed on passenger planes and that it would back a ban proposed by the pilots association.

"We believe the risk is immediate and urgent," Angela Stubblefield, a Federal Aviation Administration hazardous materials safety official, said at a Department of Transportation meeting on Oct. 8.

Airlines flying to and from the U.S. that accept lithium battery shipments carry 26 million passengers a year, she said.