The chief executive of, Matson Navigation Co., the transit company responsible for spilling 1,400 tons of molasses in Hawaii waters says the company will fully pay for cleanup and other costs without passing them on to taxpayers or customers. 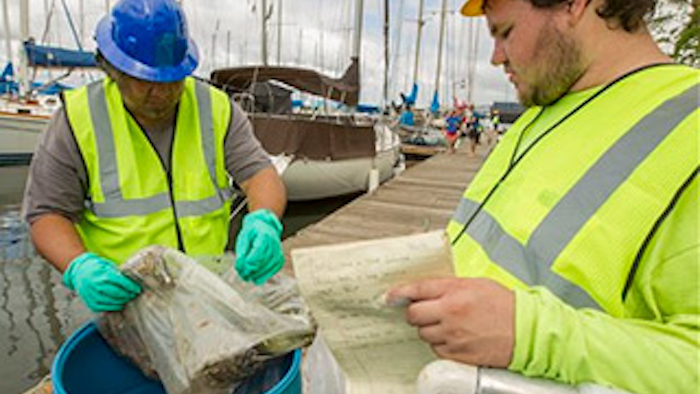 HONOLULU (AP) — The chief executive of the transit company responsible for spilling 1,400 tons of molasses in Hawaii waters says the company will fully pay for cleanup and other costs without passing them on to taxpayers or customers.

Matson Navigation Co. CEO Matt Cox said Monday that he is sorry for the spill, and the company won't ship molasses until it's confident a similar spill will not occur.

Cox said it's too early to know how much the spill will cost to clean up. He spoke after taking a boat tour of the harbor and nearby waters with state officials, lawmakers and reporters.

Crews working the water and shorelines have collected about 25,000 dead fish and other animals from surrounding waters since the spill was discovered Sept. 9, officials said Monday.

The spill happened in Honolulu Harbor in an industrial area west of downtown, where Matson loads molasses and other goods for shipping, about 5 miles west of Waikiki.

Some 233,000 gallons of molasses spilled from the leaky pipe as the sugary substance was moved from storage tanks to ships sailing to California.

Chris Lee, a safety and security manager at Matson, told reporters during the tour that Matson learned of the spill from one of its neighbors who noticed something in the water on Sept. 9, one day after Matson finished pumping the molasses and sent its boat to Oakland, Calif.

"Once the ship was full, we didn't have any indication that there was any problem," Lee said.

In a phone interview, Hawaii U.S. Sen. Brian Schatz said it's clear lawmakers have to look at how the system run by Matson Navigation Co. is regulated by federal and state officials.

"I don't think there's any doubt that that's one of the things that we're going to have to take a look at," Schatz told The Associated Press when asked about Matson's lack of a spill plan and oversight of the underground pipes connected to Hawaii's waters.

"It's clear that this wasn't just a mechanical failure of a pipe but also a systems failure," Schatz said.

Glenn Okimoto, director of the Hawaii Department of Transportation, the agency responsible for overseeing Matson's use of the harbor, said the state didn't require Matson to report anything about the molasses pipe.

"We've never asked," Okimoto said. "It kind of went under the radar."

Cox reiterated that Matson did not plan for the possibility of a spill.

"With the benefit of hindsight, we should have," he said.

A U.S. Coast Guard unit that specializes in responding to hazardous spills is joining the effort to clean up and assess the damage.

But the full extent of the damage and how long it might last are unclear, though state officials say conditions are improving compared with last week, when dead fish were popping up in droves and a plume discolored the water.

"All of us who care about the south shore of Oahu are sick about this," Schatz said. "But we don't really know the status of the ecosystem and we won't until we have scientists in the water collecting and analyzing data."

The Coast Guard's Pacific Strike team includes more than 70 people. The U.S. Environmental Protection Agency and the National Oceanic and Atmospheric Administration also have responded, along with state agencies.

Company and state officials say the leak happened when molasses seeped into a section of pipe that was supposed to be sealed off.

Schatz said officials are focusing on assessing and containing damages right now, and can focus on how things went wrong afterward.

"That's going to take research and resources, and this is a current problem in the ocean right now," Schatz said. "We have to have all hands on deck in mitigating it while we still can."

Cox said the company is also reviewing what went wrong and plans to make its findings available once it's done.

Matson has the largest market share of any company shipping goods between Hawaii and the U.S. mainland. Fluctuations in Matson's shipping rates can have a large effect on Hawaii, which imports about 80 percent of its consumer goods from out of state.

Matson's stock closed Monday at $27.35, up 15 cents or less than one percent. The stock has largely declined since hitting $28.71 the day the spill was first reported last week.

Associated Press writer Audrey McAvoy contributed to this report. Oskar Garcia can be reached on Twitter at http://twitter.com/oskargarcia