U.S. Department of Agriculture grain inspectors are refusing to walk past picket lines and into a grain terminal in Vancouver, Washington. 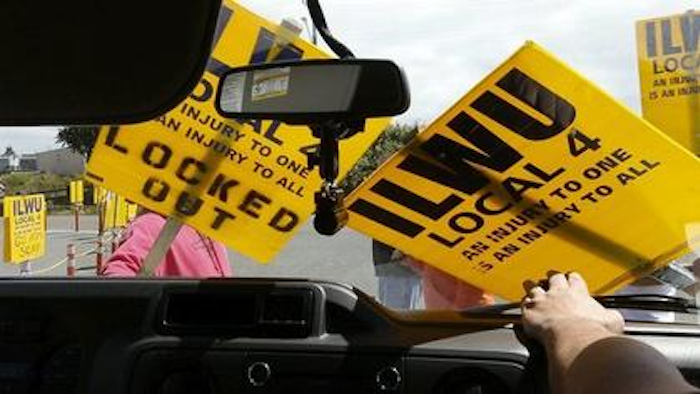 PORTLAND, Ore. (AP) — U.S. Department of Agriculture grain inspectors are refusing to walk past picket lines and into a grain terminal in Vancouver, Washington.

The action comes as harvest approaches and shortly after state grain inspectors from the Washington State Department of Agriculture stopped entering the United Grain terminal, citing safety concerns because of picketing longshoremen.

The Capital Press newspaper (http://is.gd/I0527j) reports that federal inspectors continue to work at the Columbia Grain facility in Portland, where locked-out longshoremen are also picketing.

Pat McCormick, a spokesman for both terminals, told The Associated Press "it's puzzling" that inspectors consider the Portland terminal safe enough to inspect, but not Vancouver.

Federal law requires inspections for grain exports, so the decision effectively shuts down shipments from the Vancouver terminal, which has the largest storage capacity of any West Coast grain-export facility.

Both export terminals have locked out workers from the International Longshore and Warehouse Union because of a contract dispute that has lasted nearly two years. United Grain imposed its lockout in February 2013 after saying a Longshore worker sabotaged company equipment.

The Washington inspectors had previously been escorted into the facility by state troopers, but Washington Gov. Jay Inslee withdrew that protection in early July.

United Grain then asked the USDA to send its own inspectors into the terminal. The agency denied that request, because it "does not believe that the situation at the Port of Vancouver would ensure safe access," according to an Aug. 4 letter from Edward Avalos, the USDA undersecretary for marketing and regulatory programs.

United Grain was able to load two ships with about 3 million bushels of grain in July because it obtained inspection waivers from the buyer, the buyer's nation and the USDA, McCormick said.

Obtaining such waivers is not easy, so United Grain will likely load only a fraction of the 17 million bushels scheduled to move through the facility in August, he said.