Tribal leaders on an American Indian reservation in the heart of North Dakota's booming oil patch are proposing fees for companies that burn and waste natural gas. 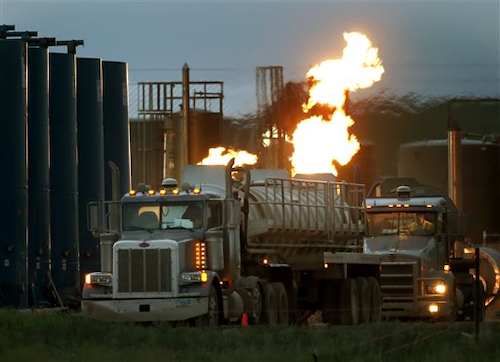 BISMARCK, N.D. (AP) — Tribal leaders on an American Indian reservation in the heart of North Dakota's booming oil patch are proposing fees for companies that burn and waste natural gas.

The Three Affiliated Tribes outlined its plan to impose fees in a six-page document sent to oil companies. In it, the tribe said companies would be required to pay royalties for "flaring" natural gas to compensate for lost revenue when the gas isn't brought to market and sold.

Oil production on the Fort Berthold Reservation accounts for about a third of the state's oil output of more than 1 million barrels a day, which has made North Dakota the second-largest oil producing state in the country behind Texas.

Industry officials are questioning whether the tribe has the jurisdiction to impose such fees and warned that the change could slow oil production on the reservation. They note that tribal officials signed a tax agreement in 2008 that gave the state power to regulate reservation oil production.

Before that agreement, oil companies were hesitant to drill on the sovereign land due to complex tribal rules and tax uncertainty.

State officials said Thursday they were unaware of the tribe's fee proposal and declined immediate comment.

"We certainly hope the state and the tribe can concur on who has regulatory authority," said Ron Ness, president of the North Dakota Petroleum Council, a group representing more than 500 companies working in the state's oil patch. "It doesn't do anybody any good to try to determine whose rules you got to follow."

Natural gas is a byproduct of oil drilling, but a third of it is burned off in North Dakota — at a cost of more than $1 million a month in lost state revenue — because building infrastructure to capture the gas hasn't kept pace with oil drilling.

The Three Affiliated Tribes notified oil drillers late last week of the fee plan, which would require companies that burn-off natural gas to pay royalties beginning a month after a well has been drilled.

Separate documents also furnished by the oil companies to the AP show that tribal officials earlier proposed annual rights-of-way and other charges for the companies to develop gas-gathering systems and transmission pipelines on the Fort Berthold Reservation. The reservation, which spans a million acres in west-central North Dakota, is home to the Mandan, Hidatsa and Arikara tribes.

"All these things lead up to disincentives and a potential slowdown," said Eric Dille, the government affairs manager for Houston-based EOG Resources Inc., one of the largest drillers operating on the reservation. "It's very problematic and does nothing to get pipe in the ground."

Under North Dakota law, oil producers can flare natural gas for a year without paying taxes or royalties on it. Companies can then ask state regulators for an extension because of the high costs of moving the gas to market. Almost all the extensions requested in recent years were granted, records show.

State officials have said that flaring on the Fort Berthold Reservation accounts for more than 30 percent of flaring in the state.

Three Affiliated Tribes officials said money from the fees would help pay to monitor the effect of greenhousegas emissions on tribal members, and help develop a natural gas system to make electricity for the reservation.

"More than ever before, the tribe supports cleaner energy, cleaner air," they said in the document sent to oil companies said.

The tribe's proposal comes less than a month after North Dakota regulators adopted the most stringent rules to date aimed at reducing flaring. The state Industrial Commission, which regulates North Dakota's oil and gas industry, endorsed a policy in July that sets goals to reduce flaring in incremental steps through 2020. The new rules allow regulators to set production limits on oil companies if the targets are not met.

The tribe's proposal suggests that the state's plan does not go far enough.

"The tribe's belief (is) that operators will actively initiate (gas capture plans) when they have to the motivation of paying royalties on the flared gas," the proposal said.

For all Crisco’s popularity, what exactly is that thick, white substance in the can?
Helen Zoe Veit
Dec 23rd, 2019