Amid a fog of conflicting claims, Alaskans head to the polls Tuesday to decide if the state's old system for taxing oil companies, passed in 2007 after some lawmakers were suspected of bribery, is better than the new system, a tax cut passed last year to try to attract investment from petroleum companies. 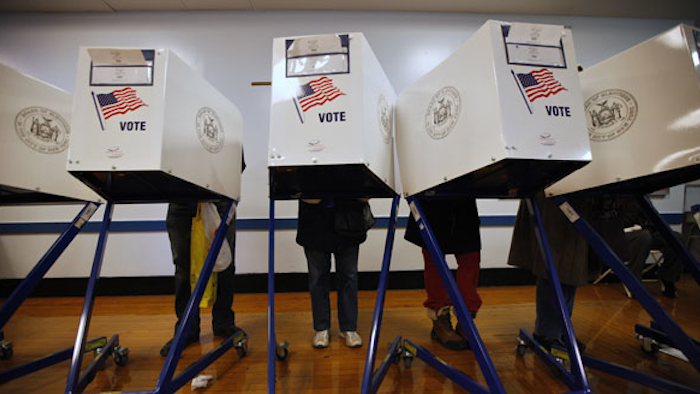 ANCHORAGE, Alaska (AP) — Amid a fog of conflicting claims, Alaskans head to the polls Tuesday to decide if the state's old system for taxing oil companies, passed in 2007 after some lawmakers were suspected of bribery, is better than the new system, a tax cut passed last year to try to attract investment from petroleum companies.

Ballot Measure No. 1 asks voters if they want to reject the 2013 law that supporters have dubbed the "More Alaska Production Act." Advocated by Gov. Sean Parnell, it replaced the production tax known as "Alaska's Clear and Equitable Share," or ACES, that was championed by former Gov. Sarah Palin.

Proof of the law's ineffectiveness, according to critics, was evident in the trans-Alaska pipeline: The flow had fallen from 2 million barrels per day in 1988 to 547,866 barrels in 2012.

Referendum advocates contend Parnell could have fine-tuned ACES but instead pushed for the new law, which gives huge tax breaks to profitable petroleum companies at the expense of revenue that could provide money for teachers, law enforcement, construction projects and other needs. ACES' supporters credited the progressive surcharge with capturing oil price spikes, helping to fatten state coffers.

The new law, also known as Senate Bill 21, would have cost the state $8.5 billion in revenue if it had been in place from 2006 to 2013, said state Sen. Bill Wielechowski, D-Anchorage, who has been appearing on debate panels to urge a "yes" vote on the referendum to repeal it.

Repercussions from the change are already showing up, he said. The Legislature this year approved an operating budget that will require a $1.5 billion dip into savings, he said.

Figures provided by the Parnell administration show petroleum company investment under ACES grew from $3.7 billion in 2007 to $6.1 billion in 2013, Wielechowski said.

State Sen. Lesil McGuire, R-Anchorage, voted for ACES, but said it did not deliver on the promises advocates made. If the tax regime was so effective, she asked, where are the results?

"It was given seven years, and a change was needed," she said. "There isn't a plan to fix it that is better than SB 21."

Referendum backers started collecting signatures to repeal the new law days after it passed, but it needs to be given a chance to succeed, McGuire said. The major provisions of the law took effect Jan. 1.

No pressure, voters, but billions of dollars are at stake.

"If you vote yes, you are going to revert to a failed system that will doom Alaska," McGuire told a debate audience Monday night.

Fifty-thousand people signed a petition to put the repeal on the ballot, said former Anchorage Assembly Chairwoman Jane Angvik, because the new law gives away billions in potential state revenue with no obligation for oil companies to invest in Alaska.