Top U.S. and Chinese officials are wrapping up annual strategic and economic talks that have yielded greater cooperation on reducing greenhouse gases but again exposed Washington's frustration over cyber theft it says is emanating from the emerging Asian power. 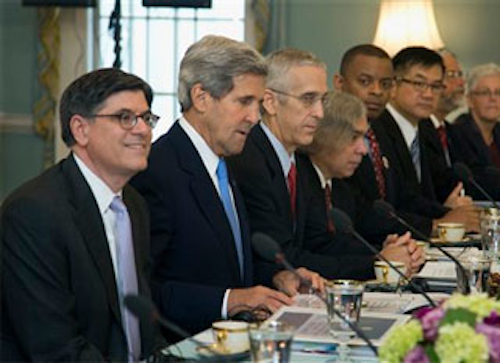 WASHINGTON (AP) — Top U.S. and Chinese officials are wrapping up annual strategic and economic talks that have yielded greater cooperation on reducing greenhouse gases but again exposed Washington's frustration over cyber theft it says is emanating from the emerging Asian power.

Secretary of State John Kerry, who came to Washington for the start of the two-day talks Wednesday, was returning to his wife's hospital bedside in Boston as she recovers from a seizure-like episode. His deputy, William Burns, will take his place at Thursday's discussions.

The gathering is taking a place a month after the U.S. and Chinese presidents' summit in California, which tried to set a positive tone in relations between the two world powers. Officials are looking at ways to build cooperation, even as they hash out deep-seated differences.

They are discussing barriers to trade and investment, the nuclear program of Chinese ally North Korea and other matters, including Iran and Syria's civil war.

Thursday's agenda starts with a round table of Chinese and U.S. officials and business leaders at the Treasury Department. Washington wants Beijing to expedite economic reforms and reduce state involvement in the economy; China has its own concerns about screening of its companies that want to invest in the U.S.

The most tangible outcome of Wednesday's talks was an announcement of new initiatives to reduce greenhouse gas emissions and air pollution. The two sides agreed to cooperate on cutting emissions from vehicles and coal combustion, and to promote more efficient use of energy in buildings, transport and industry. Implementation plans will be ready by October, the State Department said.

That builds on an agreement between President Barack Obama and President Xi Jinping in June to work together on reducing hydrofluorocarbons, a potent greenhouse gas used in refrigerators, air conditioners and industrial applications.

The two sides have also discussed cybersecurity — now a prominent U.S. concern in its relations with China.

Vice President Joe Biden said Wednesday that cyber theft against U.S. companies is "out of bounds and needs to stop." Chinese State Councilor Yang Jiechi only said that cybersecurity is among the global challenges the U.S. and China should work together on.