Officials from Japan's Nuclear Regulation Authority said a leak is "strongly suspected" and urged plant operator Tokyo Electric Power Co. to determine where the water may be leaking from and assess the environmental and other risks, including the impact on the food chain. 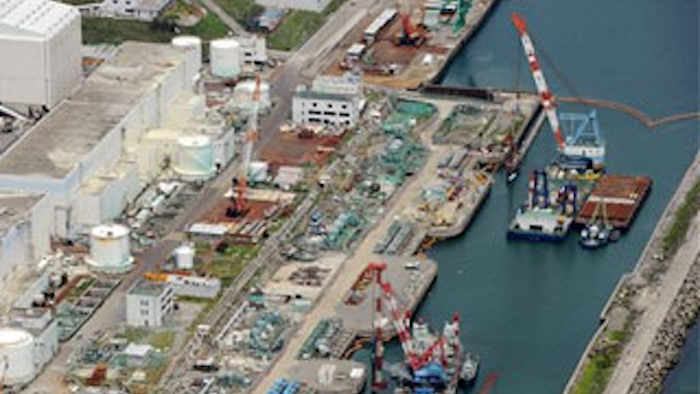 TOKYO (AP) — Japan's nuclear regulator says radioactive water from the crippled Fukushima power plant is probably leaking into the Pacific Ocean, a problem long suspected by experts but denied by the plant's operator.

Officials from the Nuclear Regulation Authority said a leak is "strongly suspected" and urged plant operator Tokyo Electric Power Co. to determine where the water may be leaking from and assess the environmental and other risks, including the impact on the food chain. The watchdog said Wednesday it would form a panel of experts to look into ways to contain the problem.

The watchdog's findings underscore TEPCO's delayed response in dealing with a problem that experts have long said existed. On Wednesday, the company continued to raise doubts about whether a leak exists.

TEPCO spokesman Noriyuki Imaizumi said the increase in cesium levels in monitoring well water samples does not necessarily mean contaminated water from the plant is leaking to the ocean. TEPCO was running another test on water samples and suspects earlier spikes might have been caused by cesium-laced dust slipping into the samples, he said. But he said TEPCO is open to the watchdog's suggestions to take safety steps.

The Fukushima Dai-ichi plant was ravaged by the March 2011 earthquake and tsunami, and TEPCO has used massive amounts of water to cool the damaged reactors since then. Repeated leaks of the contaminated water stored on site have hampered decommissioning efforts.

Marine biologists have warned that the radioactive water may be leaking continuously into the sea from underground, citing high radioactivity in fish samples taken near the plant.

Since May, TEPCO has reported spikes in cesium levels in underground water collected from a coastal observation pit, while the water-soluble element strontium showed high levels in seawater samples taken in areas just off the coast of the plant. The company says most of the contamination has been there since the 2011 accident.

TEPCO has said it has detected "no significant impact" on the environment. It says cesium tends to be absorbed in the soil, and denies water contaminated with that element reached the sea.

But the Nuclear Regulation Authority said Wednesday that samples from both the pit water and coastal seawater indicated that contaminated underground water likely had reached the sea.

Watchdog chairman Shunichi Tanaka said he thinks that the seawater contamination has been happening since the accident, but that it was worst early in the crisis.

"What's most important is to minimize the leak to the outside and reduce the impact on the human society," he said.

Most fish and seafood from along the Fukushima coast are barred from the domestic market and from being exported. Seafood caught north and south of Fukushima are regularly tested for radiation to make sure they are safe for consumption. In the wider ocean, the contaminated water becomes too diluted to be harmful.

The safety of fish and other foods from around Fukushima remains a concern among ordinary Japanese, who are among the world's highest per capita consumers of seafood.

TEPCO says it has taken steps to prevent seawater contamination but that it is impossible to completely prevent the contamination from spreading.

Atsunao Marui, underground water expert at the National Institute of Advanced Industrial Science and Technology, said there is a possibility of new leaks from reactor buildings. He said TEPCO will have to expand its seawater sampling and its investigation of the underground water system to assess the extent of possible contamination.

"It is important to apply several layers of protection," he told NHK television.

The plant still runs on jury-rigged systems to cool the reactors, and managing the contaminated water and its storage has been a chronic headache.

"When something unexpected happens, we can only take stopgap measures, which shows how unstable Fukushima Dai-ichi still is," Tanaka said. "Given the situation, we can only use the best of our wisdom and do what we can."