North Carolina's environmental agency said Sunday it wrongly declared all test results for the arsenic levels in the Dan River as safe for people after a massive coal ash spill. 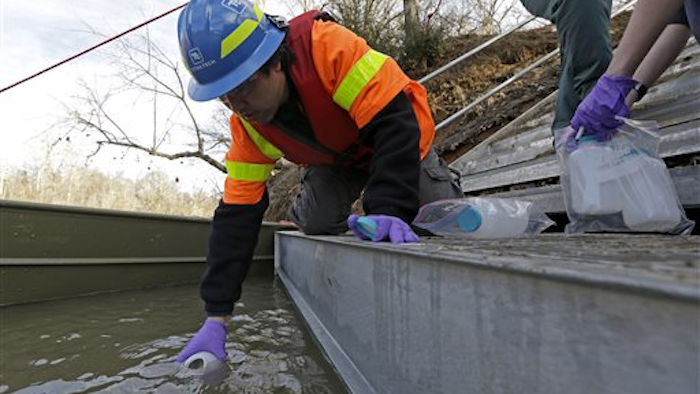 RALEIGH, N.C. (AP) — North Carolina's environmental agency said Sunday it wrongly declared all test results for the arsenic levels in the Dan River as safe for people after a massive coal ash spill.

A water sample taken Monday, two days after the spill was discovered, was four times higher than the maximum level for people to have prolonged contact, such as swimming, the state Department of Environment and Natural Resources said.

"We made an honest mistake while interpreting the results," state Division of Water Resources director Tom Reeder said in a statement.

A water sample collected Tuesday showed arsenic levels that were considered safe for people, said Dianne Reid, head of environmental sciences for the water resources division. More recent test results for the week are not yet complete, she said in an interview Sunday.

State environmental officials released test results from the river this week showing readings for arsenic, lead and other toxic contaminates linked to coal ash, but said they were within safety limits for both people and fish. State regulators had taken those samples two miles downstream from the plant, rather than closer to the spill site where two environmental groups reported readings far exceeding safety standards.

Officials 20 miles downstream in Danville, Va., said they are successfully filtering arsenic, lead and other toxins from the drinking water supplied to the city's 43,000 residents.

Duke Energy said it permanently plugged the leak Saturday, six days after it was discovered. Duke says up to 82,000 tons of ash from a coal-burning power plant mixed with 27 million gallons of contaminated water escaped.