The Obama administration on Wednesday decried a ruling by a federal judge that blocks rules for hydraulic fracturing. 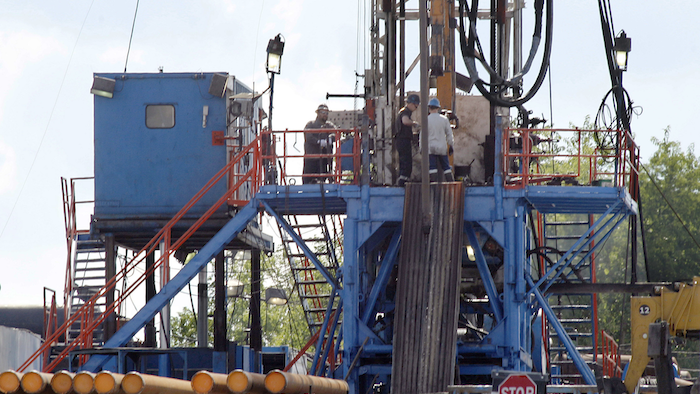 WASHINGTON (AP) — The Obama administration on Wednesday decried a ruling by a federal judge that blocks rules for hydraulic fracturing, saying the decision prevents regulators from using "21st-century standards" to ensure that oil and gas operations are conducted safely on public lands.

Kershaw's comments came after a judge in Wyoming ruled late Tuesday that federal regulators lack authority to set rules for hydraulic fracturing, also known as fracking. The ruling by U.S. District Judge Scott Skavdahl deals another setback to the Obama administration's efforts to tighten how fossil fuels are mined.

Skavdahl said the Bureau of Land Management can't set the rules because Congress has not authorized it to do so. The judge, who was nominated by Obama in 2011, wrote that the court's role is not to decide whether hydraulic fracturing is good or bad for the environment, but to interpret whether Congress has given the Department of Interior legal authority to regulate the practice.

"It has not," wrote Skavdahl, who last year blocked implementation of rules drafted by the agency.

The White House cast the ruling as a temporary setback while it awaits a decision from the Court of Appeals for the 10th Circuit, which is also reviewing the rule.

"We obviously believe that we've got a strong argument to make about the important role the federal government can play in ensuring that hydraulic fracturing that's done on public lands doesn't threaten the drinking water of people who live in the area. It's a pretty simple proposition," White House spokesman Josh Earnest said. "We'll continue to make our case in the courts."

The states of Colorado, North Dakota, Utah and Wyoming oppose the rules involving hydraulic fracturing, which involves injecting a mixture of water, sand and chemicals underground to increase production from oil and gaswells.

The Bureau of Land Management and a coalition of environmental groups say the rules are necessary to protect the environment. The bureau's rules would have required petroleum developers to disclose to regulators the ingredients in the chemical products they use to improve the results of hydraulic fracturing, also known asfracking.

Neal Kirby, a spokesman for the Independent Petroleum Association of America, said Tuesday he is pleased with Skavdahl's decision.

"BLM did not have the authority to issue its rule in the first place," Kirby said. "Today's decision demonstrates BLM's efforts are not needed and that states are — and have for over 60 years been — in the best position to safely regulate hydraulic fracturing."

"This rule undermined the careful and efficient regulation of fracturing that states have put in place, like the rules written by Wyoming," Lummis said.

The states and other rule opponents, including groups representing the energy industry and the Ute Indian Tribe of the Uintah and Ouray, based in Utah, filed briefs with Skavdahl. Wyoming, Utah and Colorado worked together on the case, while North Dakota filed its own brief.

The Ute Tribe stated in its brief that it agrees with the states that the Bureau of Land Management lacks rulemaking authority. The tribe also said that the federal agency lacks authority to regulate fracking on land that the United States holds in trust for the Indian tribes and tribal members.

Tuesday's ruling marked the latest setback for the Obama administration's efforts on environmental issues. Earlier this year, the U.S. Supreme Court blocked the Environmental Protection Agency from enforcing the Clean Power Plan, Obama's effort to slow climate change by reducing power-plant emissions by one-third by 2030. The court said legal challenges to the rules had to be resolved first.

About two dozen states, most of them GOP-led, and scores of utilities and coal mining companies have sued to stop the rules.