In a White House signing ceremony, Obama praised both chemicals industry groups and environmentalists alike for finding consensus despite their usual differences of opinion. 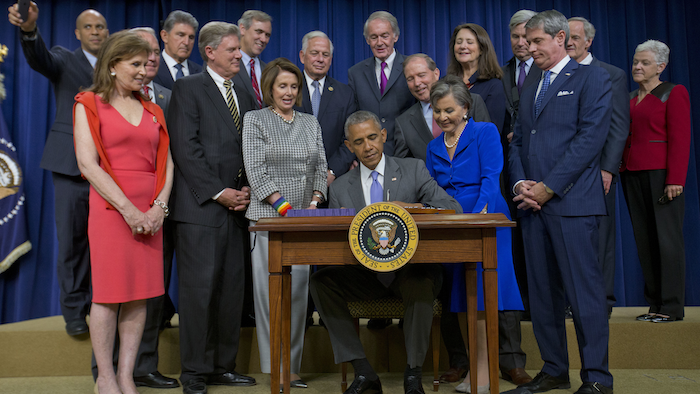 WASHINGTON (AP) — President Barack Obama signed the first major overhaul of toxic chemicals rules in 40 years into law on Wednesday, calling it proof that Washington can function despite intense polarization.

In a White House signing ceremony, Obama praised both chemicals industry groups and environmentalists alike for finding consensus despite their usual differences of opinion. He was joined by a diverse group of U.S. lawmakers who helped pass the legislation, including House Democratic leader Nancy Pelosi of California and Republican Sen. David Vitter of Louisiana.

"If we can get this bill done, it means somewhere out there on the horizon, we can make our politics less toxic as well," Obama said before putting his pen to the bill.

In addition to updating rules for tens of thousands of everyday chemicals, the law also sets safety standards for dangerous chemicals like formaldehyde, asbestos and styrene. The law aims to standardize on the national level what is currently a jumble of state rules governing the $800 billion-per-year industry.

Congress spent more than three years working on the bill, which rewrites the 1976 Toxic Substances Control Actand aims to "bring chemical regulation into the 21st century," according to the American Chemistry Council, which backed the overhaul.

"Folks should have the confidence to know the laundry detergent we buy isn't going to make us sick, the mattress our babies sleep on isn't going to harm them," Obama said.

Republicans and some Democrats have been sharply critical of Obama's efforts to strengthen environmental and climate protections through the use of regulations they say stifles businesses and creates unnecessary burdens. In recent years, many Republicans have worked to pull funding for the Environmental Protection Agency or eliminate it entirely.

So it was especially unusual that the toxic chemicals bill passed a Republican-controlled Congress with broad support despite giving the EPA increased authority to assess the safety of new and existing chemicals.

"That doesn't happen very often these days," Obama said. "So this is a really significant piece of business."

Business groups had sought a single, federal standard to eliminate the complexity of dealing with state regulations that don't always line up with each other. Still, some Republicans opposed the legislation and called it an overzealous Washington takeover of a matter they said should be left to the states.

Obama said the law meant that for the first time in its history, the U.S. would be able to regulate chemicaleffectively. He described it as an extension of bipartisan efforts decades ago to start protecting America's air, water and wildlife, and said the chemicals law would be particularly critical for vulnerable populations like children, pregnant women, the elderly and the poor.

The bill's namesake, former New Jersey Sen. Frank Lautenberg, died in 2013 after having worked for years to fix the law. His wife, Bonnie Lautenberg, was at the White House for the signing.