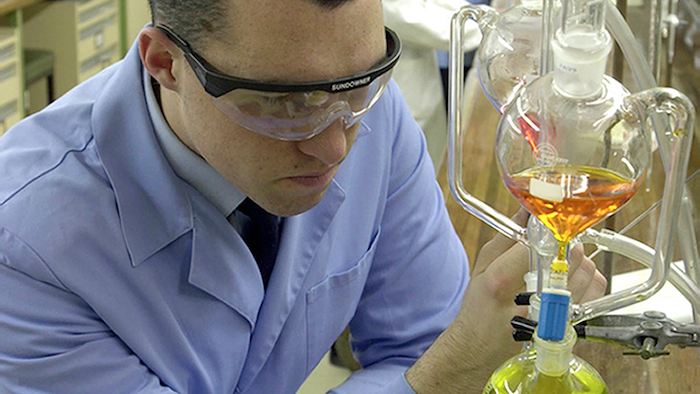 Bryan Balazs of the Lawrence Livermore National Laboratory also said that chemistry jobs will lag behind other sciences in employment growth in coming years.

Balazs participated in a recent American Chemical Society task force on employment issues convened by ACS President Donna Nelson. Chemistry World reports that the panel presented its findings at the ACS annual convention in San Diego over the weekend.

"When the supply of bachelor’s degree chemists outpaces the demand, then you get into a problem, and the inverse is true," Balazs said.

Balazs told CW that physical and life sciences and engineering jobs are expected to grow by 13.5 percent between 2012 and 2022, but that chemical industry jobs will climb by just 5.6 percent over that span.

In the manufacturing sector, meanwhile, chemical-related jobs in are expected to decline across the board.

Karl Haider, another task force member and the head of business growth services at Covestro, added that just 55 percent of new chemistry graduates are employed in the industry.

The unemployment rate among those graduates steadily increased over the past decade and now stands at 12.5 percent, and salaries in the chemical sector are generally flat or declining.

Fellow panel member Tiffany Hoerter of DuPont added that undergraduate and graduate degrees in the U.S. increased sharply since 2004.

The task force urged ACS officials to examine chemical education in the U.S. and to call for more business-friendly legislation to bolster the domestic chemical industry.

Here are four ways small businesses adapted in response to the pandemic that may have long-lasting effects on future operations.
Jun 10th, 2021
Follow Us
Most Recent