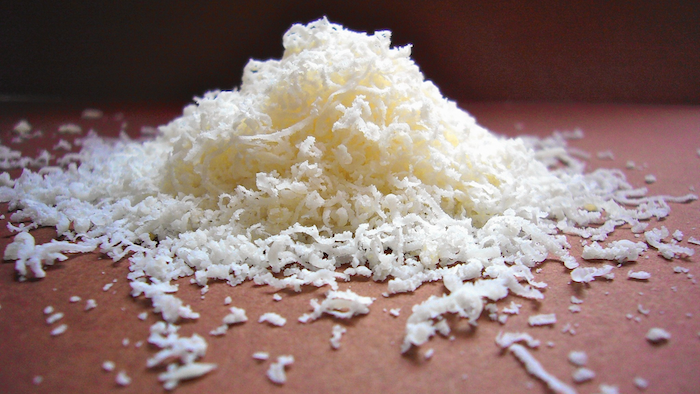 Although that's a somewhat disturbing image, the controversy surrounding Pennsylvania-based Castle Cheese and other grated cheeses wasn't related to food safety, but to consumer fraud.

The material Castle added to the cheese was made from wood pulp — a substance otherwise known as cellulose, a common ingredient added to a wide array of foods for some 40 years. And regulators weren't necessarily concerned about the presence of cellulose itself, which is used in cheese as an anti-clumping agent. Federal regulations actually allow up to 4 percent of the material in cheese products, and reports indicated that it is likely to be harmless even in much larger quantities.

"It's just a cheap way to make a product appear to be healthier than it is," Jaydee Hanson of the Center for Food Safety told Eater. "But you probably want to get your fiber from whole wheat instead of whole wood."

The Food and Drug Administration instead cracked down on Castle for combining alternative, cheaper cheeses with cellulose and marketing them as real parmesan or Romano.

Michelle Myrter, who served as president of Castle Cheese, last week pleaded guilty to one misdemeanor charge stemming from the FDA inspections at its Slippery Rock facility in late 2012.

In the wake of the report, customers also sued Walmart over its claims that "100% Grated Parmesan" contained elevated levels of cellulose.

Although Castle is going through bankruptcy and the products in question — which went to numerous large chains between 2010 and 2013 — are no longer made, a rival cheesemaker estimated that one-fifth of hard Italian cheeses sold in the U.S. are improperly labeled.

“The tipping point was grated cheese, where less than 40 percent of the product was actually a cheese product,” Neal Schuman, CEO of New Jersey-based market leader Arthur Schuman Inc., told Bloomberg. “Consumers are innocent and they’re not getting what they bargained for.”