Toyota's Japan output will drop by 50,000 vehicles in April, or about 7 percent of Japan production. 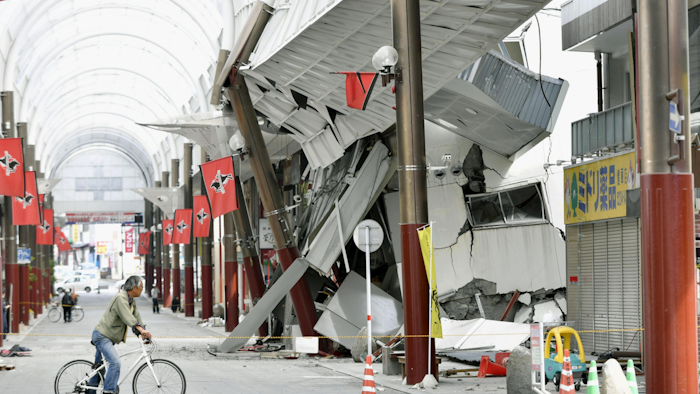 The twin earthquakes that struck southern Japan were having ripple effects far beyond the disaster zone, forcing Toyota to suspend production at most of its factories across the country, and affecting other manufacturers as well.

The quake damaged Honda's motorcycle plant in Kumamoto, the largest city affected by the two quakes that hit late Thursday and early Saturday, killing at least 42 people. Japan's Nikkei 225 stock index tumbled more than 3 percent Monday in part on worries over quake repercussions as well as a spike in the yen and a drop in oil prices.

But the economic impact is nowhere near as large as the havoc wreaked by the 2011 quake and tsunami disasters, which slammed supply chains so badly that Japanese automakers' production was halted even in the U.S. They learned the hard way about their vulnerability to such interruptions, especially from second- and third-tier suppliers, and have worked to create contingency plans.

Disasters tend to hobble Japan's mighty manufacturers because they are supported by small machine shops that provide components to bigger suppliers, which in turn supply bigger players.

"That kind of lesson has been learned," said Nissan Motor Co. spokesman Dion Corbett. "We now have maps that show where exactly the suppliers are."

Nissan's two plants in Kyushu were temporarily shut down after the quakes for checkups. The checks found damage was minor, allowing the plants to be resume operations on Monday, Corbett said. 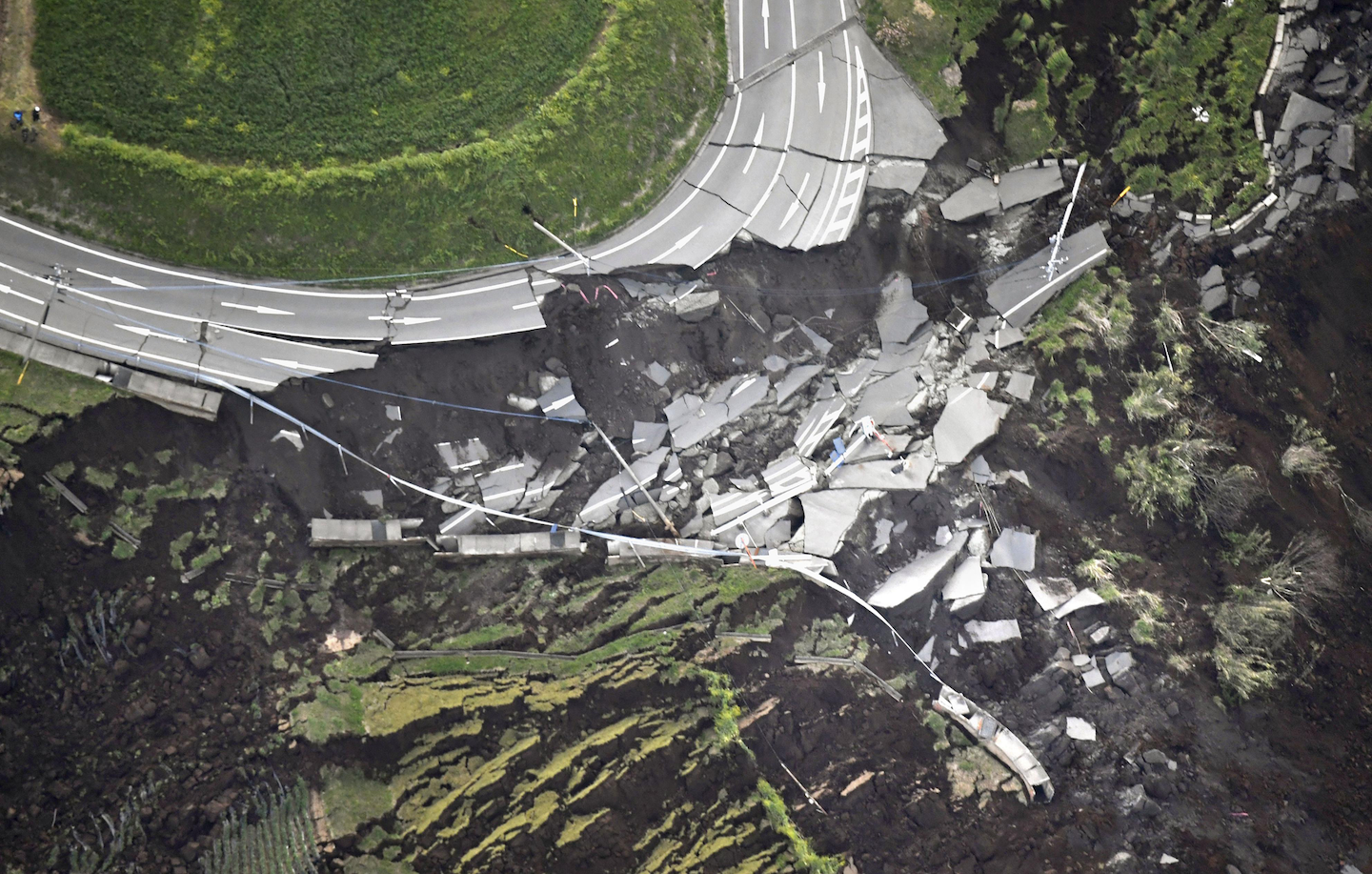 In this aerial photo, the landslide caused by the earthquake disrupts the road in Minamiaso town, Kumamoto prefecture, southern Japan Saturday, April 16, 2016. (Kyodo News via AP)

Some of the worst-affected areas are deep in the mountains surrounding Mount Aso, Japan's largest active volcano, an area renowned for dairy farming. But one of the hardest-hit cities was Mashiki, a center for semiconductor fabrication and other manufacturing.

Sony Corp. said its sensor and device plant in Kumamoto was closed. Although the building's structure was intact and no employees were injured, the precise nature of the production processes requires that delicately calibrated equipment must be checked carefully.

"The impact to near-term economic activity looks inevitable, while the comprehensive picture is difficult to gauge now, particularly due to the continued aftershocks," Masamichi Adachi of J.P. Morgan said in a commentary.

Overall, the risk to the outlook for growth is "to the downside," he said.

Renesas Electronics Corp.'s computer chip plant in Kumamoto city was also shuttered, spokeswoman Makie Uehara said. It was unclear when production would resume. Gases that can be dangerous are used to maintain antiseptic conditions for chip production, and so safety had to be confirmed before other damage could be checked. 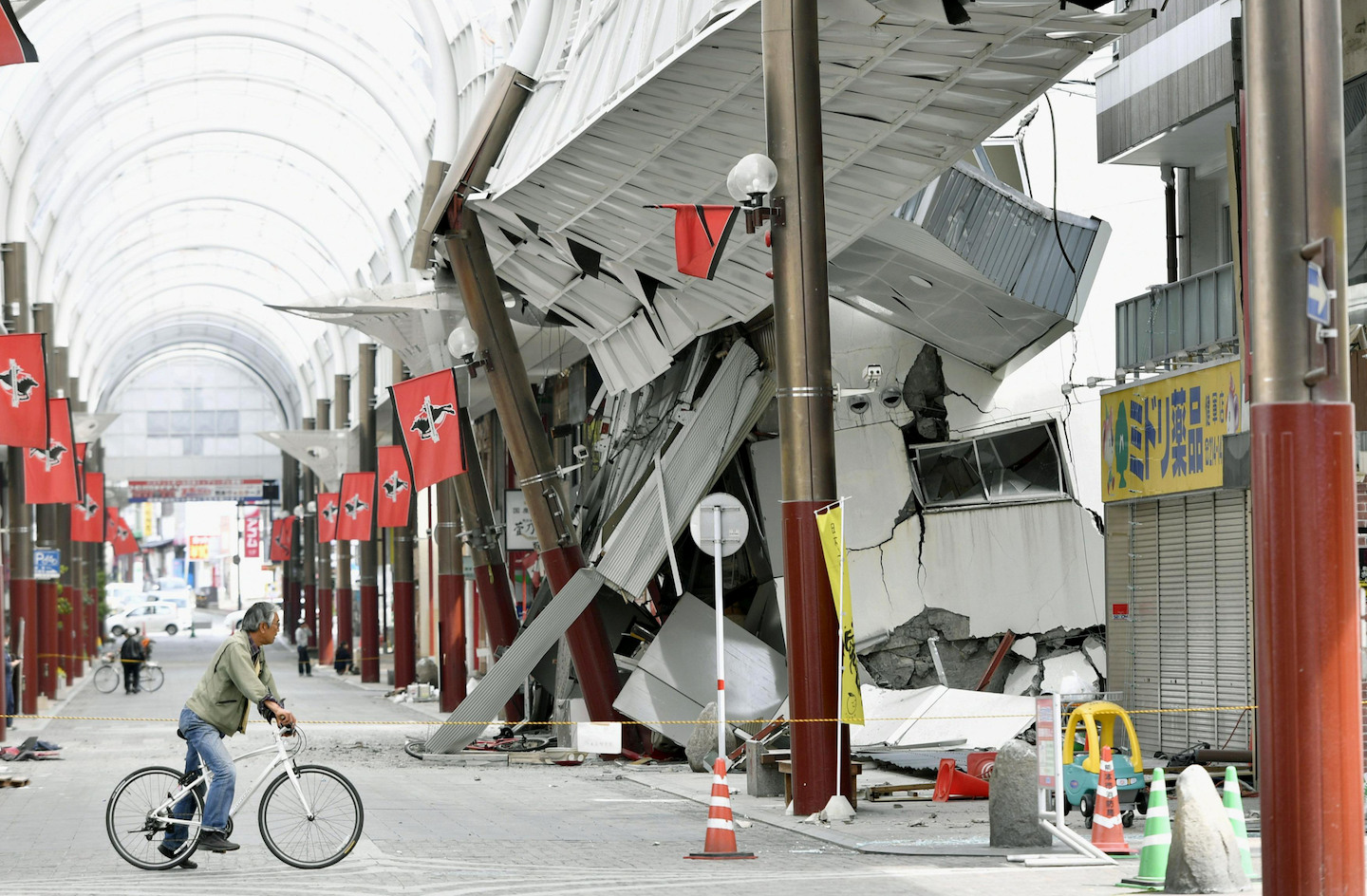 Toyota Motor Corp., the most heavily affected of the big car makers, has stopped production not only at a factory in Kyushu but at 15 others in Japan through Friday. Output will resume depending on the availability of parts.

Toyota's Japan output will drop by 50,000 vehicles in April, or about 7 percent of Japan production, according to a report on the quake's effects on automakers by SMBC Nikko. Toyota declined to comment on that estimate.

Honda Motor Corp.'s motorcycle plant was severely damaged. Due to repeated aftershocks, it was unsafe even to go inside to carefully inspect the damage, said company spokesman Teruhiko Tatebe. Production has been stopped until at least Friday.

So far, production at Honda's auto plants has not been affected, Tatebe said. The company did not rule out future supply problems.