The leak, already several months old, has forced the relocation of several thousand residents who said the stench made them sick. 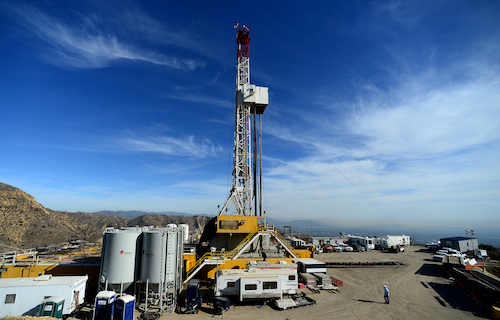 The leak at Porter Ranch started in October, and likely won’t be fixed for at least two more months. Officials have relocated several thousand residents who said the stench made them sick. (Dean Musgrove/Los Angeles Daily News via AP, Pool, File)

The escape of tons of natural gas from storage under a Los Angeles neighborhood is not likely to be fixed for at least another two months because of the specific dynamics of the leak, according to officials.

The leak at Porter Ranch, already several months old, has forced the relocation of several thousand residents who said the stench made them sick.

The Los Angeles Times reported Saturday (http://tinyurl.com/qa7jj9b) that the leak persists because workers were unable to plug it and instead have the painstaking task of drilling two relief wells.

Officials with Southern California Gas Co., which operates the Aliso Canyon Underground Storage Facility, estimate the new wells may not be finished until the end of February, or even later.

The new pipes will meet where the well emerges from rock that forms the "capstone" which seals the gas in place.

The natural repository is huge — nearly one cubic mile at a depth of a mile and a half, according to the newspaper — and holds natural gas brought from as far away as Canada. The gas company holds it underground, then distributes it to nearly 22 million customers in the region.

Southern California Gas tried to plug the damaged well after the leak began in October, but both an ice blockage and upward pressure averaging 2,700 pounds per square inch wouldn't let the mixture of mud and brine work.

Amid concerns that trying to force the mixture down might create a larger leak, the company decided to drill two relief wells, said Jason Marshall, chief deputy director of the California Department of Conservation, which regulates natural gas wells.

If all goes to plan, those wells will intersect the damaged well where it meets the capstone, about a mile down. Workers hope that will let them plug the well below the damaged, leaky section. The cause and exact location of the leak are unclear, though Marshall said engineers speculate it is about 500 feet underground.

Marshall suspects age is a factor — the well began operating in 1954, according to Conservation Department records.

Drilling on the first relief well began Dec. 4, but will take weeks to complete. Drilling of the second well is expected by Jan. 20, Marshall said — it's a backup, in case the first one misses the existing 7-inch pipe or is unable to deliver enough brine and mud to stop the leak.

Trying to intercept at such a depth, Marshall told the newspaper, "is a little like trying to hit a quarter-inch target from the distance of a football field."