The new mixing tower will allow Jiffy to increase production to more than 350 million pounds per month. 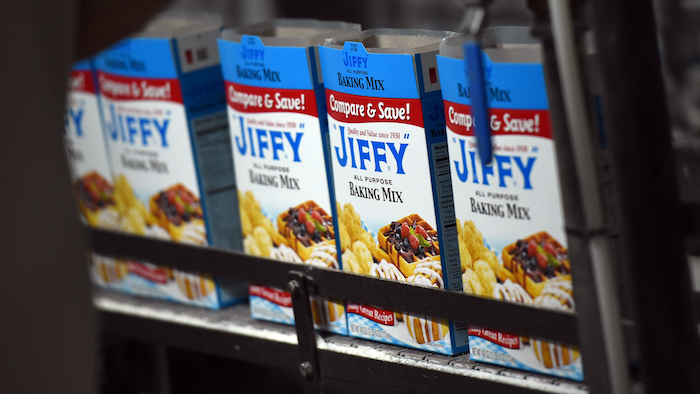 Jiffy baking mix boxes make their way through the plant on a conveyor belt on Tuesday, Dec. 8, 2015 in Chelsea, Mich. Chelsea Milling Company, the maker of Jiffy Mix, has begun a $35M expansion project at their downtown Chelsea location. (Melanie Maxwell/The Ann Arbor News via AP)

The Michigan-based maker of Jiffy Mix baking mixes plans a $35 million expansion as part of an effort to diversify the business.

Chelsea Milling Co. plans a new mixing tower that will eventually be attached to a new packaging plant and support building, The Ann Arbor News reported. The company plans to keep making boxes of mix for retail sale while boosting institutional and food-service sales.

Howdy Holmes, the fourth-generation owner of Chelsea Milling, said the expansion comes as more people are eating away from home.

"More people want to go out to eat, they're eating in restaurants, in their cars, and as things change we need to reinvent ourselves," Holmes said.

Jiffy pulls in more than $130 million annually in total revenue and doesn't advertise, preferring to develop relationships with retailers and rely on brand recognition. Under the plans, the company will make and sell more 50-pound sacks of mixes.

In addition to mixing ingredients, Jiffy creates its own packaging in-house and mills its own flour.

The company's workforce likely will decline from about 315 employees to about 240, Holmes said, but that will be done without layoffs. He said about half of the company's workers are approaching retirement age, so when they leave old jobs won't be filled.

"We could have done this and forced people out of their jobs, but that's not how we wanted to do it," Holmes said.