A long-awaited Hawaii Supreme Court ruling invalidated a construction permit for what would have been one of the world's largest telescopes. 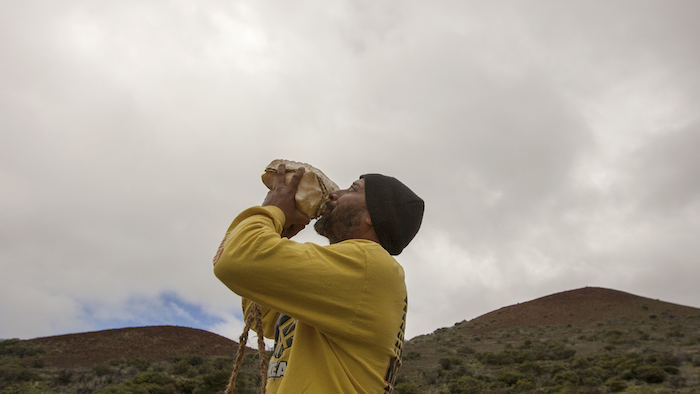 A long-awaited Hawaii Supreme Court ruling Wednesday invalidating a construction permit for what would be one of the world's largest telescopes represents a major setback for the $1.4 billion project on a mountain astronomers tout for having perfect star-gazing conditions.

The ruling is a victory for protesters who say they are fighting the project to curb development, preserve Native Hawaiian culture and protect the Big Island's Mauna Kea, a mountain many consider sacred.

The court ruled that the state Board of Land and Natural Resources should not have issued a permit for the telescope before a hearings officer reviewed a petition by a group challenging the project's approval.

The ruling sends the matter back for a new contested case hearing.

"Today's decision provides direction to a new land board and another opportunity for people to discuss Mauna Kea's future," state Attorney General Doug Chin said in a statement. "The attorney general's office will be advising the land board regarding next steps."

A group of universities in California and Canada plan to build the Thirty Meter Telescope with partners from China, India and Japan.

"We thank the Hawaii Supreme Court for the timely ruling and we respect their decision," TMT International Observatory Board of Directors Chairman Henry Yang said in a statement. "TMT will follow the process set forth by the state, as we always have. We are assessing our next steps on the way forward."

In 2013, the state Board of Land and Natural Resources issued a permit for the Thirty Meter Telescope, which allowed the project to proceed with construction on lands that are within the Mauna Kea conservation district. A group of opponents appealed, but a circuit court affirmed the land board's decision.

Attorneys for the state and the University of Hawaii, which manages the land, argue that the permit was approved after extensive public input.

The University of Hawaii Board of Regents unanimously approved the plan to build the telescope in 2010, which cleared the way for applying for the conservation permit. At that meeting, seven members of the public testified in favor of the telescope. No opponents spoke, though critics had been vocal about their arguments against the telescope.

While the permit appeal was before the Intermediate Court of Appeals, the opponents asked to bypass the court and have the case go directly to the Hawaii Supreme Court. The high court agreed to hear the case.

Kealoha Pisciotta, one of the plaintiffs in the lawsuit challenging the permit, said she hope the ruling leads to telescope officials dropping the project.

Opposition to the project became more vocal and visible when protesters blocked people from reaching an October 2014 groundbreaking ceremony. After that, the protests intensified.

Construction halted in April after 31 protesters were arrested for blocking construction. A second attempt to restart construction on June 24 ended with the arrests of 12 protesters and construction crews in vehicles retreating before reaching the site when they encountered large boulders in the road.

Protesters last month braced for another standoff when telescope officials said a crew would return for vehicle maintenance work sometime in November.

As protesters were gathering on Mauna Kea on Nov. 17, the state Supreme Court temporarily suspended the permit.

"I'm just very grateful to the heavens and the court and the people," Pisciotta said. "The people took a stand and that's significant. They did it without violence, peacefully. And that's a blessing."