A man who worked onsite after the disaster is the first to develop cancer from radiation. 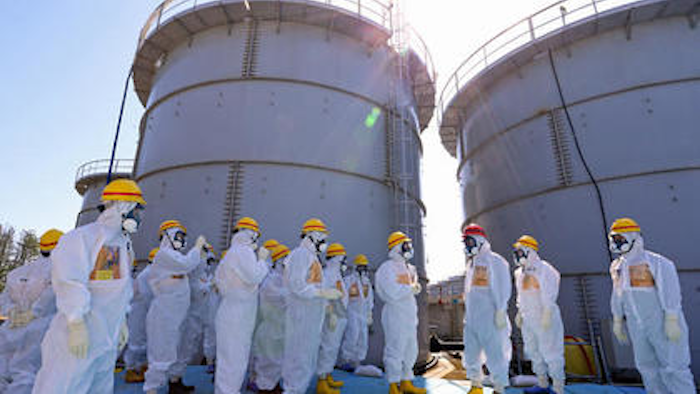 A man in his 40s who worked at the Fukushima nuclear plant after the 2011 disaster is the first person confirmed to have developed cancer from radiation exposure, Japan confirmed Tuesday.

The Health and Labor Ministry said the man, who wasn't identified further, has received government approval for compensation for the radiation-induced illness.

It said he helped install covers on damaged reactors at the plant from October 2012 to December 2013. He did not work at Fukushima in the weeks after the massive earthquake and tsunami destroyed the plant in March 2011, when radiation levels were the highest. The plant has since been stabilized, except for occasional leaks of contaminated water.

The man had worked at several other nuclear plants before Fukushima, the ministry said. Medical experts could not determine whether his exposure at Fukushima was the direct cause of his leukemia, a ministry official said on condition of anonymity, citing sensitivity of the issue. But his total exposure of 19.8 millisievert was mostly from his work at Fukushima, the official said.

The case could be a warning of future cancer cases because his exposure was below the widely recognized annual limit for nuclear workers. Japan uses the same 100 millisievert threshold in deciding whether to allow evacuees to return to their homes near the plant. During the height of the crisis, more than 170 workers were exposed to radiation exceeding that threshold, which is widely recognized for increased risk of developing cancer.

No deaths due to direct radiation exposure at Fukushima have occurred, though several workers at the plant have died due to injuries or illnesses such as heat stroke or heart attacks.

Scientifically linking individual cancer cases to radiation is difficult. While residents and some experts are concerned about the growing number of thyroid cancer cases among Fukushima children, others say routine check-ups might have increased tallies, including cases undiscovered otherwise.

Since the crisis, nearly 45,000 workers have taken part in the massive cleanup effort at the Fukushima plant, about half of them with exposure levels exceeding 5 millisievert, according to the Tokyo Electric Power Co., which operates the plant. Protecting workers from radiation exposure will be crucial to maintaining the workforce through the decades-long decommissioning project.

Thirteen other workers in Japan's nuclear industry have been certified for government compensation for cancer and other illnesses linked to their radiation exposure at work since the 1970s, according to the ministry. Since the Fukushima crisis, 10 other compensation cases have been filed, with seven being rejected and three still being examined.

A claimant can be considered for compensation for illnesses linked to radiation exposure with annual dose exceeding 5 millisieverts and the illness developing more than a year since first contact to radiation.