The destruction of the hulking red buildings remains the largest demolition of a district on the National Register of Historic Places. 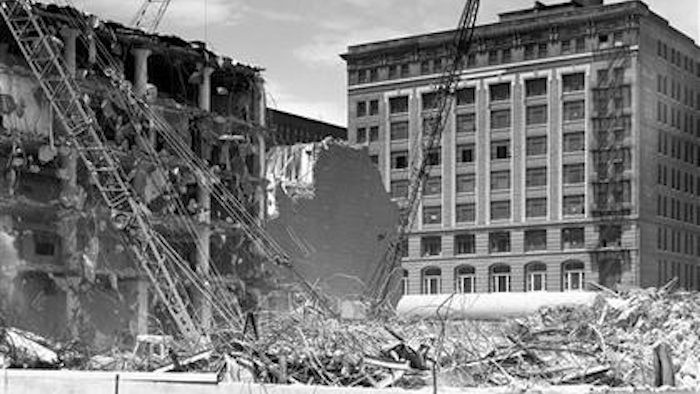 Not long before wrecking balls leveled the nearly two dozen warehouses that made up historic Jobbers Canyon, Roberta Vana recalls walking through the downtown neighborhood near her office that for a century had been crowded with workers unloading freight trains packed with equipment, food and furniture for sale across the upper Midwest.

"It really was like being in a canyon," she said of the towering brick buildings, which captured the aura of Omaha's role as major transportation hub in the late 1800s. "You'd walk down there and get a cavernous feeling."

Now for Vana and others, it's more of a sinking feeling as they look back on what the city lost amid news that ConAgra, the company behind the 1989 demolition, will move its headquarters from the sprawling, suburban-style headquarters it built at the site to new offices in Chicago.

The destruction of the hulking red buildings, most of them seven or eight stories high, remains the largest demolition of a district on the National Register of Historic Places.

"I'm laughing and crying at the same time because of the irony," said Omaha architect George Haecker, who belonged to a group that opposed the demolition. He referred to the food conglomerate's decision to move to Chicago's Merchandise Mart, a huge warehouse-like structure that dates to the same era as Jobbers Canyon, because talented young employees now prefer a vibrant urban setting.

The loss has stirred a painful discussion about the sacrifices job-hungry cities should make for employers who are economically important but whose plans and preferences may be fickle.

Razed in Jobbers Canyon, which was named after the wholesale "jobbers" who shipped in goods for distribution to retailers, were the kind of buildings that have become bustling entertainment districts in many cities. The prospects for ConAgra's 1980s-style corporate campus are less certain.

ConAgra officials say about 1,200 of the current 2,500 workers will remain at the cluster of two- and three-story buildings surrounded by lush grass, overlooking a man-made lake and approached by a flag-lined boulevard. Unless another company leases them, several of the buildings will be empty.

The ConAgra campus sits between the Missouri River and a surviving cluster of brick buildings called The Old Market, which has been redeveloped with shops, restaurants and apartments.

In some ways, the success of The Old Market, considered among the top tourist draws in Nebraska, reminds Omaha residents of how much more they might have had.

"It was a giant loss. And now it's adding insult to injury that they're moving into a very similar facility in Chicago," said Omaha architect Roger duRand, who was an early proponent of renovating The Old Market.

But some city officials stand by the demolition, saying it saved thousands of ConAgra jobs for 25 years and prompted other local investment.

"I think people thought it was a big loss, but they thought it was a sacrifice that needed to happen," said former Omaha Planning Director Marty Shukert said. "There is not a doubt in my mind that it was the right decision."

ConAgra spokesman Chris Kircher said in a written statement that the decision to clear Jobbers Canyon was made long ago by different leadership so there was little he could say now. He noted, however, that the choices kept ConAgra in Omaha, to the benefit of the company and community.

At the time, ConAgra, the maker of Healthy Choice, Banquet dinners and Hebrew National hotdogs, was considering moving to Tennessee. Omaha had already lost the oil company that later became Enron.

City officials tried to talk ConAgra into using several of the 22 warehouses, but the company's CEO at the time, Mike Harper, said he didn't want to look at what he called the "ugly red brick buildings."

Nebraska also adopted a package of tax breaks in 1987 to seal the deal.

Donald Nogg, president of Nogg Bros. Paper Co., who had to sell his company's 1906-vintage warehouse, said the buildings might be valuable now for restaurants and apartments, but he won't second-guess the earlier decisions.

"The whole area turned out really nice," he said.

Even with the second thoughts over Jobbers Canyon, Haeker said, immediate business concerns still usually outweigh preservation concerns. Last year, a 100-year-old apartment building was demolished over preservationists' objections because Mutual of Omaha wanted the block for an office park near its Midtown Crossing development.

"We're not there yet," Haecker said. "I think the corporate mindset is still business first and esthetics second."