IMPO Onsite: Passion Cuts Through — A Century Of LENOX Tools

This year marks the 100-year anniversary of LENOX, a tool manufacturer headquartered out of Massachusetts. 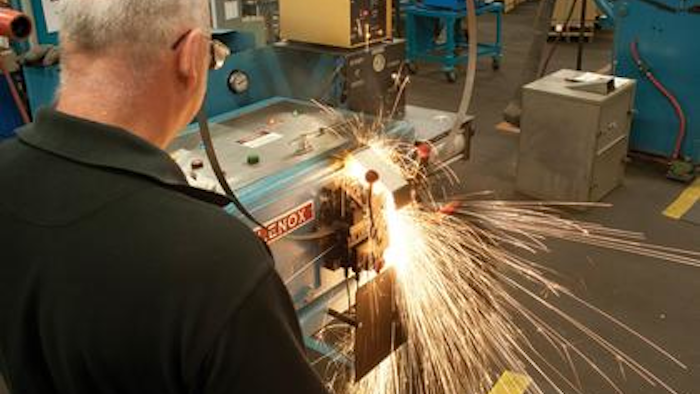 This year marks the 100-year anniversary of LENOX, a tool manufacturer headquartered out of East Longmeadow, Massachusetts. Although the brand now designs and manufactures everything from high precision saw blades to power tool accessories, LENOX was born from much simpler origins with just one purpose in mind: to make hacksaw blades that cut faster and lasted longer.

LENOX began as LENOX American Saw in 1915 – an entire company comprised of 10 dedicated employees. Only five years later in 1920, LENOX was producing a variety of hacksaw blades and band saw blades. As the decades passed, LENOX continued to build momentum.

Notable benchmarks include when hole saws began production in 1959 and the 1965 introduction of an electron beam welder used to manufacture the first American-made bi-metal band saw blades sold in North America. Then, in the late 1970s, LENOX decided it was time to expand, so they brought the first bi-metal reciprocating saw blades to market.

Another event, the 2003 acquisition of LENOX by Newell Rubbermaid, also proved to be a significant and helpful shift in the company’s tenure.

Bill Burke, the Newell Rubbermaid chief operating officer and group president of tools, spoke of how it has allowed investment in consumer insights.

“We are always thinking about how we can give our end-users more capabilities with the products that we provide,” Burke says. “How do we make it easier for them to do their job; how can we make it more cost-effective for them; can it be faster, better quality, can they do it with greater ease? It’s all about continuing to innovate – it never stops.”

This commitment to innovation echoed the sentiments of Matt Lacroix, the Newell Rubbermaid director of brand marketing for tools.

“Contractors can expect continued innovation around our core categories,” Lacroix says. “We are spending a lot of time trying to develop new technologies that will ultimately give you a higher-performing product.”

A whole century later, LENOX overshadows in sheer size what began as LENOX American Saw. Now, LENOX has become a global business that employs more than 900 people and whose products are sold in 70-plus countries. The company headquarters even operates within 600,000 square feet – an ISO 9001-certified space devoted to designing and testing quality hand tools, band saw blades and power tool accessories.

Innovation Starts On The Plant Floor

To match their dedication to innovation, LENOX knew that investing in plant technology would improve long-term efficiency and produce a higher- quality product. As part of the LENOX team’s model for growth, this, in part, meant that they had to convince customers that they could identify problem areas for end-users and offer solutions. Common pain points for LENOX customers included the following:

To meet customer demands, LENOX wanted an operation that would defend and extend, which meant utilizing a plant floor that prized preventative maintenance and active troubleshooting to create a high-performance product portfolio, while also finding ways to reduce costs.

In particular, the increased expense of cutting steel over the years drove the need to generate new saw machine designs with modern, high-technology metals. By constructing these new techniques to cut metal – and through more advanced manufacturing processes – LENOX has been able to produce improved saw blades while keeping manufacturing expenses to a minimum.

Additionally, LENOX plant managers, as any should, value the power of regularly scheduled maintenance; not only is this essential in preserving the life of sawing machines, but it is also necessary in running an efficient operation. Specifically, the care and keeping of the machines that continue to produce and produce on a daily basis is essential to ensuring the effectiveness and continuous improvement of their plant floor.

For LENOX, this comes down, in part, to the quality of the metal used on the blade used to cut. Heat, for instance, is the enemy of any cutting tool, because any heat generated during the formation of the blade can cause the cutting edge to wear away at a much higher rate. Because of this, LENOX utilizes advanced surface preparedness in the form of specialized lubricants and cleaning techniques.

LENOX’s next generation welding technology is another way that the company is both expanding the quality of their product and doing so while keeping costs to a minimum. Although the investment in these new forms of technology was substantial, the acquisition by Newell Rubbermaid eased some of these financial woes and refreshed the company. Now, there is more room to invest in technology and especially in research and development.

Although LENOX is rather hush-hush about the specifics that make their plant operate at its highest efficiency, it does seem to all boil down to one thing: the employees.

The tale of Lee “Hackman” Breton exemplifies this most clearly. Breton began working at LENOX in 1962 on the manufacturing floor. While there, he actually manufactured the first bi-metal reciprocating saw blade – by hand. After his success in designing and manufacturing this innovative product for then-President Jim Davis, LENOX decided in 1981 that Breton should show off his skills with the latest hacksaw blades. So, he cut a car in half. Forever earning the name “Hackman,” Breton traveled around the world for decades cutting cars, oil tank trucks, cargo planes, a box car and even a bus at the 1999 Super Bowl XXXIIII.

Amid the scores of changes the LENOX brand has faced throughout the century, Burke admits that the company’s success wouldn’t be possible without the drive of past and current employees. In fact, LENOX boasts more than 20 families with more than 50 years of service; Hackman and his daughter are among these families.

“Passion cuts through,” Burke says. “It’s really as simple as that.”