Former Peanut Exec Gets 28 Years In Prison For Outbreak

It's the harshest criminal penalty ever for a U.S. producer in a food-borne illness case and a span his attorneys say might as well be a life sentence. 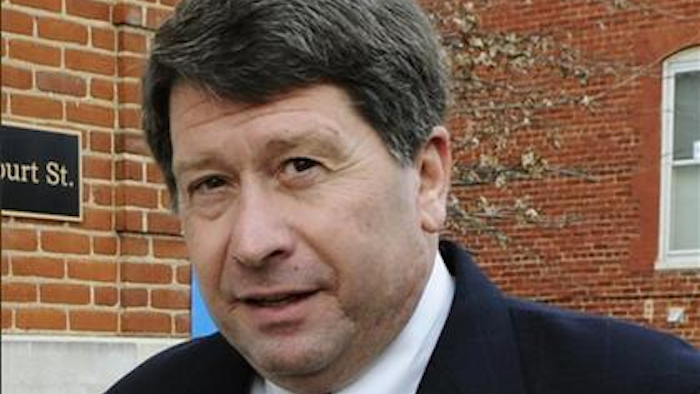 Before federal marshals led him from the courtroom en route to prison, possibly for the rest of his life, Stewart Parnell apologized years after his company's peanut butter spawned a deadly outbreak of salmonella poisoning.

The former Peanut Corporation of America owner had remained publicly silent in 2009 after authorities traced salmonella blamed for killing nine people and sickening 714 to his plant in rural southwest Georgia. He refused to testify when called before a congressional hearing, and likewise never took the witness stand during the criminal trial that led to his conviction in U.S. District Court a year ago.

A judge Monday sentenced 61-year-old Parnell to 28 years in prison. It's the harshest criminal penalty ever for a U.S. producer in a food-borne illness case and a span his attorneys say might as well be a life sentence. It came down after Parnell, in a shaky voice, spoke to those he had harmed.

"It's just been a seven-year nightmare for me and my family," Parnell told a courtroom filled with families of children who survived violent illnesses and elderly adults who died after eating his company's peanut butter. "All I can do is come before you and ask for forgiveness from you and the people back here. I'm truly sorry for what happened."

Ernest Carter of Chicago, whose grandmother died after snacking on peanut butter crackers linked to Parnell's plant, called the apology "too little, too late."

And though Parnell escaped his maximum possible punishment — 803 years in prison, which Judge W. Louis Sands called "inappropriate" — Carter and other victims' relatives applauded his sentence.

"It should be enough to send a message to the other manufacturers that this is not going to be tolerated anymore and they had better inspect their food," said Randy Napier, whose 80-year-old mother in Ohio was also among the nine who died.

The salmonella outbreak in 2008 and 2009 triggered one of the largest food recalls in U.S. history and cost Peanut Corporation's customers — companies that used its peanut products in everything from snack crackers to pet food — an estimated $143 million.

U.S. Attorney Michael Moore of Georgia's Middle District, whose office prosecuted the case, called it "a landmark with implications that will resonate not just in the food industry but in corporate boardrooms across the country."

Bill Marler, an attorney who specializes in food-safety cases and represented many of the salmonella victims in civil lawsuits, said: "The fact that he was prosecuted at all is a victory for consumers."

Parnell and two co-defendants also sentenced Monday were never charged with any deaths or for making people ill. Instead, they were charged with defrauding corporate customers such as Kellogg's, which turned the company's peanuts and peanut butter into finished products.

A federal jury convicted Parnell of knowingly shipping contaminated peanut butter and of faking results of lab tests intended to screen for salmonella. In all he was found guilty of 67 criminal counts.

Defense attorneys said they plan to appeal both the sentences and convictions.

Tom Bondurant, one of Stewart Parnell's attorneys, said 28 years would amount to a life sentence for his client.

"If you compare it with other food-safety criminal cases, it's tremendously out of line," Bondurant said.

In April, two former egg executives in Iowa were sentenced to three months in jail for their role in a 2010 salmonella outbreak linked to more than 1,900 illnesses. In May, ConAgra Foods agreed to pay $11.2 million to settle federal charges that it shipped salmonella-tainted Peter Pan Peanut Butter that sickened at least 625 people in 2007. But no company executives were charged in that case.

At Peanut Corporation's plant in Blakely, Georgia, federal investigators found a leaky roof, roaches and evidence of rodents at the plant, all ingredients for brewing salmonella. They also uncovered emails and records showing food confirmed by lab tests to contain salmonella was shipped to customers anyway. Other batches were never tested at all, but got shipped with fake lab records saying salmonella screenings were negative.

Emails prosecutors presented at trial showed that Parnell once directed employees to "turn them loose" after samples of peanuts tested positive for salmonella and then were cleared in another test. Several months before the outbreak, when a final lab test found salmonella, Parnell expressed concern to a Georgia plant manager, writing in an Oct. 6, 2008, email that the delay "is costing us huge $$$$$."

Parnell's company filed for bankruptcy shortly after it was shut down in 2009.

Members of Parnell's family pleaded for leniency. His mother, Zelda Parnell, told the judge both of her sons "have suffered for years."

"They lost their income, all their material things and worst of all their pride," she said.