In a victory for scientists researching ways to use fish parts that don't fit on a bun, a seafood company has begun sales of vitamins using oil extracted from the pollock livers. 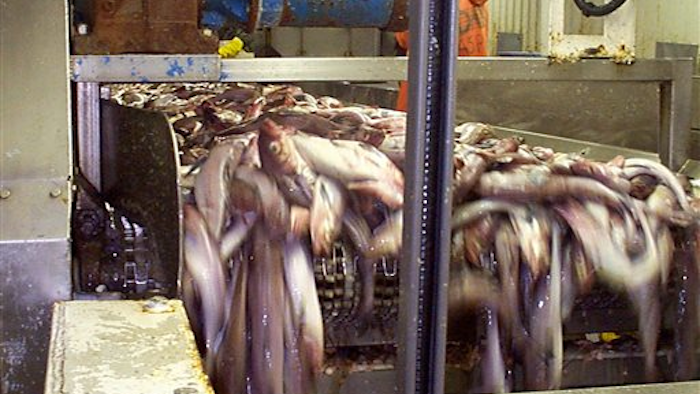 ANCHORAGE, Alaska (AP) -- Alaska pollock sandwiches at fast-food restaurants can now be topped off with a supplement extracted from another part of the fish.

In a victory for scientists researching ways to use fish parts that don't fit on a bun, a seafood company has begun sales of vitamins using oil extracted from the pollock livers. American Marine Ingredients is selling 54 Degrees North Omega-3 with Vitamin D3, using a distillation method researched by University of Alaska Fairbanks associate professor Alex Oliveira.

"It's a beautiful oil. There's no reason we can't use it as a nutraceutical," Oliveira said from Kodiak. "It's got excellent nutritional value and the market for nutraceuticals and fish oils is booming."

Alaska is known for salmon, but pollock is the state's highest volume fishery. The 2013 catch was 1.23 million metric tons, according to the National Marine Fisheries Service, topping all varieties of salmon at 476,138 metric tons.

Pollock in U.S. markets is breaded and fried for sandwiches, but the lean white fish is sold overseas for use in fine restaurants. It's also the basic ingredient in surimi, the crab substitute made of chopped pollock flavored and blended with other ingredients.

The challenge has been to find uses for what's left after removing fillets, including the heads, bones, skin and guts. Richard Draves, vice president of product development for Seattle-based American Seafoods Co., the parent of American Marine Ingredients, calls them "side stream" because "waste" or "byproducts" implies they have no value.

"The reality is we simply haven't found the right application for those materials," he said.

The industry turns much of the leftovers into fish meal, a product in demand with the growth of the aquaculture industry. American Seafoods' five boats for a time burned pollock oil to power desalination equipment used to make the fresh water needed in surimi production.

Draves compared oil extraction to making soup from a Thanksgiving turkey carcass. After fillets are removed, the fish remains are chopped, heated and "strained," which a processor does with a centrifuge. Liquids are run through a separator to remove water. A minor amount of proteins or waxes remain in the oil, Draves said.

Oliveira used a grant from the Pollock Conservation Cooperative Research Center, an organization supported by seafood companies operating in Alaska, to see if she could produce human-grade oil through molecular distillation, also known as short-path distillation. The equipment is widely used for production of vegetable oils and flavorings.

Omega-3 fatty acids are sensitive to light, heat and oxygen. Traditional processing incorporates chemicals. Molecular distillation is a physical refining process using vacuum pumps that progressively lower the pressure to distill off impurities that could darken oil, shorten its shelf life or give it an unpleasant fish flavor, Oliveira said.

She concluded about 18 months of research in spring 2010, and American Marine Ingredients expanded her successful bench-top application to industrial-size refining for its supplement product.

Oliveira just obtained funding for studying the potential use of pollock skin for dog treats. The future of the industry, she said, will be isolating and purifying different tissues for different human-grade products.

"The plan now, and I believe it will continue to be, to segregate the byproducts because each byproduct has its different composition," she said.