Officials said Thursday that crews have found contamination underground in the area where waste was most recently being stored. 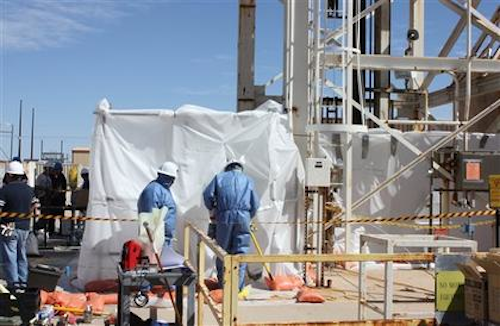 ALBUQUERQUE, N.M. (AP) -- Two months after radiation leaked from the federal government's half-mile deep nuclear waste dump in southeastern New Mexico, officials said Thursday that crews have found contamination underground in the area where waste was most recently being stored.

Tammy Reynolds, the U.S. Department of Energy's deputy recovery manager, told a community meeting in Carlsbad that more trips need to be made into the Waste Isolation Pilot Plant to further investigate the accident, but officials hope to have more information next week.

Crews on their fourth trip into the mine on Wednesday made it into the only active waste storage area and found contamination, Reynolds said. The deeper they went into the area, the more widespread the contamination, she said.

But the crews had to retreat before identifying the possible source because they had been underground for five hours in protective gear that retains heat and the batteries on their respiratory equipment were running low.

Waste at the plant is stored in panels, which are a series of rooms cut out of underground salt beds. Five of those panels are full and have already been sealed. Panel 6 is full but has not yet been sealed. Panel 7 is the current active storage area. Crews made it to both Panels 6 and 7, and they found the contamination in Panel 7, Reynolds said.

The next step is for crews, and possibly robots, to go back down to see if they can identify what caused the leak. Among the potential scenarios: a roof collapse that damaged waste-storage containers or a puncture of a container by a forklift.

The plant has been closed since mid-February, when the leak sent low levels of radiation into the air and contaminated 21 workers.

That happened nine days after a truck hauling salt underground caught fire on Feb. 5. A series of safety shortcomings were cited by a team that investigated the truck fire. It's unclear if the incidents are related.

The dump is the federal government's only permanent repository for waste from decades of nuclear-bomb building.