Coverage of the National Security Agency's sweeping surveillance program that won the Pulitzer Prize for public service Monday follows a tradition of bucking the U.S. government on matters of secret intelligence. 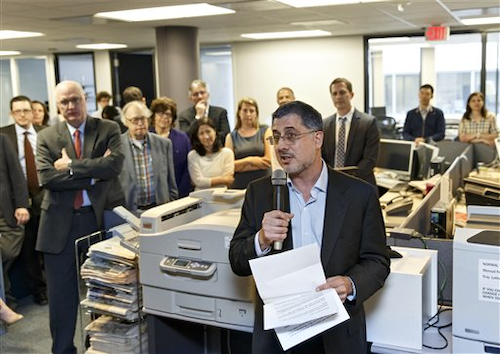 WASHINGTON (AP) -- Coverage of the National Security Agency's sweeping surveillance program that won the Pulitzer Prize for public service Monday follows a tradition of bucking the U.S. government on matters of secret intelligence.

Revelations about the NSA's secret collection of information about Americans' phone and email records were first published last June in The Washington Post and Guardian newspapers. Based on thousands of documents from leaker Edward Snowden, the ongoing coverage also revealed the extent of U.S. surveillance on foreign leaders, including allies, which has created diplomatic challenges for the Obama administration. The stories immediately caused an uproar and were roundly criticized by politicians and others as a threat to national security.

Snowden's supporters have compared his disclosures to the 1971 New York Times and Washington Post stories about the Defense Department's secret analysis of the Vietnam War, known as the Pentagon Papers. The government argued at the time that the coverage would harm national security, but the Supreme Court ruled the newspapers' stories were justified under the First Amendment. The Times also won a Pulitzer for its work.

The Pulitzer committee's citation of the NSA coverage as a public service was a validation that the public had a right to know, said reporter Barton Gellman, who led the Post's coverage.

"I'm actually very happy, in a way, that the judgment of the Pulitzer committee was not that we screwed up, frankly," Gellman said. "These were really hard calls to make: what to do, what not to do. It's nice to think we got it reasonably close to right."

Gellman called the coverage his "most exhilarating and frightening" year of reporting.

When he got the first NSA tip, he said he didn't even know the source's name but began looking into the claims. Eventually the Post set up rooms and encrypted communications for about 40 journalists, lawyers and a security consultant to decode and verify information from Snowden, said editor Anne Kornblut.

Snowden has been charged with espionage and other counts and could face up to 30 years in prison if convicted. He is in Russia, where he was granted asylum for a year. In a statement issued by an organization co-founded by Daniel Ellsberg, who leaked the Pentagon Papers, Snowden said the prize was a vindication "for everyone who believes that the public has a role in government."

The paper took the government's national security concerns seriously and agreed not to publish some information, said Executive Editor Martin Baron, who was in his first year leading the newsroom last year. But he said the Post had to pursue the story.

"What we were talking about here was a national policy that had been implemented in secret — one that dramatically expanded surveillance and sharply eroded individual privacy," he said.

Alan Rusbridger, the paper's London-based editor-in-chief, said the prize supported his view of the role of journalism. Asked what effect revealing the NSA documents had on the world, he said: "It created one of the most significant debates of this century."

"The debate is over what government should be allowed to do and to what extent the consent of citizens is necessary — whether this was legal and whether the oversight was adequate," Rusbridger said.

Critics argued that the Post and Guardian should not have published information that could damage U.S. security based on documents from someone charged with offenses including espionage.

After the prize was announced, U.S. Rep. Peter King of New York called the coverage and prize a disgrace.

"To be rewarding illegal conduct, to be enabling a traitor like Snowden, to me is not something that should be rewarded with a Pulitzer Prize," King said.

He said the release of the Pentagon Papers was wrong, but that was reporting "old news." The Pentagon Papers embarrassed the Nixon administration and were credited with confirming the public's suspicions about the Vietnam War.

In an effort to regain the public's trust, President Barack Obama has pledged to change some of the NSA surveillance programs. He assigned two panels to conduct reviews.

At the White House, a spokeswoman said the National Security Council had no comment on the Pulitzer announcement.