President Obama announced more than $100 million in grants for two dozen schools across the country that are helping students gain work experience for what he called the "in-demand jobs of the future." 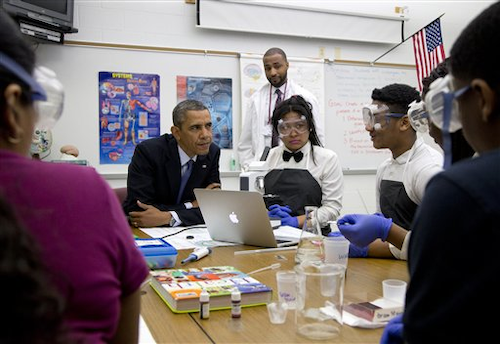 BLADENSBURG, Md. (AP) -- President Barack Obama on Monday announced more than $100 million in grants for two dozen schools across the country that are helping students gain work experience for what he called the "in-demand jobs of the future."

The money, which comes from fees that companies pay for visas to hire foreign workers for specialized jobs, is the result of an executive order Obama signed last year to better prepare high school students for college or for careers. Students are working on "cooler stuff than when I was in high school," Obama said as he announced the grants before cheering high school students in Washington's Maryland suburbs.

A total of 24 schools are being awarded the money after a nationwide competition, including the Los Angeles Unified School District, the New York City Department of Education and districts in Denver, Indianapolis and Clinton, S.C. Obama explained it will allow schools to "develop and test new curricula and models for success. We want to invest in your future," he said.

Obama announced the grants at Bladensburg High School, one of three high schools in Washington's Maryland suburbs that have created a Youth CareerConnect Program that is the recipient of $7 million under the announcement. Students at Bladensburg work on real-world projects with community partners to get ready for college admission or careers. The grant at the school, where more than 70 percent of students are low-income, will expand the Health & Biosciences Academy to prepare more students for careers in the region's fast-growing healthcare field.

Obama visited a 10th grade microbiology class, where he asked the students in lab goggles huddled over microscopes what careers they are interested in. "You on the CSI thing, forensics huh?" the president said to one student.

In another effort to make education more accessible, Vice President Joe Biden announced that the Education and Labor departments will run a program to facilitate community college students getting academic credit for apprenticeships in business and industry, in line with the federal job-training revamp that Biden has been charged with leading. Colleges will agree to provide credit for apprenticeships that are certified by an independent group, enabling students to finish their degrees quicker.

Obama also planned to take action Tuesday to use the federal government's vast array of contractors to impose rules on wages, pay disparities and hiring on a segment of the private sector that gets taxpayer money and falls under his control. He was scheduled to issue an order prohibiting federal contractors from retaliating against workers who discuss their pay and direct the Labor Department to issue new rules requiring federal contractors to provide compensation data that includes a breakdown by race and gender.

The steps, which Obama plans to take at a White House event, take aim at pay disparities between men and women. The Senate this week is scheduled to take up gender pay equity legislation that would affect all employers, but the White House-backed bill doesn't have enough Republican support to overcome procedural obstacles and will likely fail.

The executive actions are designed to let workers discuss and compare their wages openly if they wish to do so and to provide the government with better data about how federal contractors compensate their workers.