The beloved Philadelphia bakery Tastykake celebrated a century in business on Tuesday by introducing a new product, giving out free treats and serving up — what else? — birthday kake. The company marked its 100th anniversary with a multi-tiered confection made from its most famous products: Butterscotch Krimpets, Peanut Butter Kandy Kakes, Chocolate Cupkakes and Juniors. 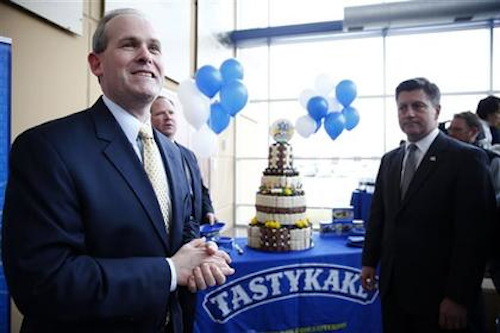 PHILADELPHIA (AP) -- The beloved Philadelphia bakery Tastykake celebrated a century in business on Tuesday by introducing a new product, giving out free treats and serving up — what else? —

The company marked its 100th anniversary with a multi-tiered confection made from its most famous products: Butterscotch Krimpets, Peanut Butter Kandy Kakes, Chocolate Cupkakes and Juniors.

"Tastykake's got the right recipe for success," president Paul Ridder said. "We have delicious snack cakes, a relentless focus on quality and freshness, a fantastic team ... and we've got loyal fans."

As a present to customers, the company introduced a limited edition Birthday Kake Cupkake made of confetti cake with chocolate icing and rainbow sprinkles. Employees also delivered free tasty sweets to charities and first responders throughout the city.

In addition, Ridder announced an initiative to distribute products through the USO, the organization dedicated to lifting the spirits of U.S. troops.

Headquartered in Philadelphia's Germantown section, the bakery made 100 cakes on its first day of business. Now, it produces nearly 5 million cakes, doughnuts, cookies and pies daily in a modern facility at the city's Navy Yard.

After struggling in recent years, Tasty Baking Co. merged with Georgia-based Flowers Foods Inc. in 2011. Tastykake employs about 750 people in the region.

Longtime delivery driver Dave Barner, who helped the company celebrate its 75th birthday, was thrilled to be at the party for its 100th.

"It's just a fantastic product that keeps us here," Barner said.