They worry that the 382,000-member UAW could be absorbed by a more hostile union. Such a merger could disrupt a decade of labor-management peace that has helped America's auto industry survive the financial crisis and emerge much stronger, according to a person with knowledge of executive discussions. 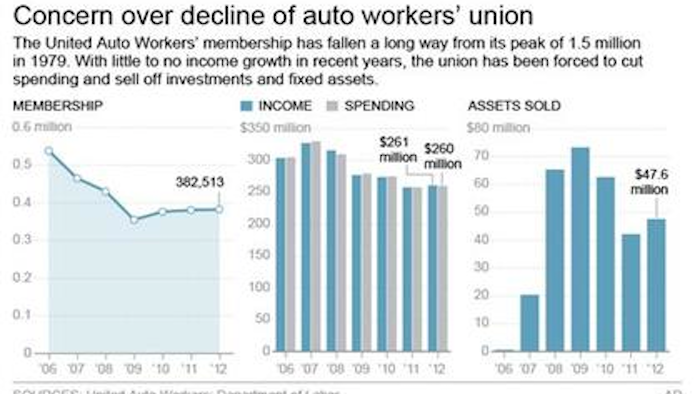 DETROIT (AP) -- The United Auto Workers' membership and dues are down sharply from just six years ago. In another sign of weakness, the union suffered a stunning defeat this month when it tried to organize a Tennessee factory run by labor-friendly Volkswagen.

The rejection, by a close vote, was a major setback in the union's effort to expand in the South, where non-union, foreign companies such as VW, Nissan and Hyundai are rapidly growing.

But instead of relief, Detroit's three automakers — Ford, Chrysler and General Motors — are increasingly anxious about the 78-year old union's future.

For them, it's a "devil you know" situation. They worry that the 382,000-member UAW could be absorbed by a more hostile union. Such a merger could disrupt a decade of labor-management peace that has helped America's auto industry survive the financial crisis and emerge much stronger, according to a person with knowledge of executive discussions.

Another union might not be as willing to keep labor costs competitive with overseas automakers, says the person, who asked not to be identified because the discussions are confidential.

Despite talk of a union merger, Gary Chaison, a labor relations professor at Clark University in Worcester, Mass., says he doesn't see the UAW giving up its identity and history by combining with another organization.

"It's something that the employers always fear," he says.

Spokesmen for Ford, GM and Chrysler declined comment, and a top UAW official says the automakers' worries are unfounded.

Even as it struggles, the UAW remains the wealthiest union in the nation, with assets of more than $1 billion at the end of 2012. Officials point to a revived U.S. auto industry and more hiring at UAW-represented factories, moves that have stabilized membership dues that have been falling since 2006.

Still, the union's loss at the VW plant in Chattanooga, Tenn., heightened concerns about how it can grow.

Annual dues collected were down more than 40 percent to $115 million from 2006 to 2012, as the union's ranks fell by 30 percent. Thousands of members took buyouts and early retirement as Detroit's auto industry lost billions during the financial crisis and worst economic downturn since the Great Depression. Membership has risen slightly since 2009, but dues collected continue to decline.

The union had hoped VW would give it a foothold in the South and help revive its fortunes. Even though the Detroit Three have hired thousands in the past four years as auto sales have recovered, union membership is nowhere near a 1979 peak of 1.5 million. And the new hires are paid only two-thirds of what veteran workers get, keeping dues revenue down. The union agreed to the lower wages and became more cooperative seven years ago to help the companies survive the recession.

As it struggles to reverse declines, the union has been forced to tighten its belt. It cut spending 15 percent from 2006-2012, but still had to sell more than $300 million worth of assets, mainly securities and other investments, to pay operating expenses. Last year alone, the UAW raised more than $47 million by selling assets to balance its budget. The union may even raise dues this year for the first time in 47 years.

"That right there tells you it's fairly dire," says Mike Smith, director of the Walter P. Reuther library, an archive of union history at Wayne State University in Detroit.

A weaker UAW is worrisome for American automakers who only recently reached a labor peace with the union after decades of fighting. The peace resulted in lower wages for new hires and in health care concessions that nearly erased a $1,500 difference in production costs per car between U.S. and Japanese automakers.

A more radical union could bring a return to strife-filled days, when UAW strikes cost automakers dearly. The last major strike, in 1998 at a GM factory in Flint, Mich., cost the company about $2 billion in profits.

The UAW isn't alone in its struggles. The decline in membership is consistent with unions overall in the U.S., where only 11 percent of workers were unionized nationwide last year. That's down from 20 percent in 1983, the Labor Department says.

For the UAW, dues won't rise by much without an influx of fresh recruits in the South, where most of the auto industry's growth is occurring.

Bob King, the UAW's president, has said the union has no long-term future if it can't organize southern foreign-car plants. Automakers from Japan, Korea and Germany have 14 assembly plants in the region, including eight built in the last 10 years, a time when Detroit was closing factories.

Yet Dennis Williams, the UAW's secretary-treasurer and likely its next president, says the companies' worries about the union's demise are off-base. He says dues and membership are now on the rise from new hiring by Detroit automakers and recruitment in areas such as casino workers and heavy truck assembly.

More spending cuts also are coming, and the union plans to balance its budget and stop selling assets in the next 2 ½ to 3 years, Williams says. He knows of no talks to merge with another union.

"The UAW can survive a long time," Williams says. "They'll be here far after you and I pass away."

Williams says the UAW will show higher dues revenue when it files a 2013 report with the Labor Department next month.

Still, the union can't fully replace dues paid by longtime workers who retired at $28 or more per hour, says Art Wheaton, an industry expert at the Worker Institute at Cornell University. Lower-tier workers for the UAW start at $15 per hour, although recent raises can make over $19.

There have been merger talks in the past between the UAW and the Steelworkers and Machinists unions, but nothing came of them, Wheaton says.

Spokesmen for both unions say there are no current discussions.

Williams is not giving up on organizing a southern auto plant, saying that the union recently signed up parts-supply and truck-building factories in the region.

And the union on Friday challenged the recent VW vote in Tennessee. In an appeal filed with the National Labor Relations Board, it asserted that "interference by politicians and outside special interest groups" swayed the vote.

The challenge comes days after the top labor representative on VW's supervisory board suggested that the anti-union atmosphere fostered by some southern politicians could lead the company to make future investments elsewhere.

Even without an expansion in the South or into other industries, the UAW is trying to boost its ranks and revenues now that the financial crisis is over and the industry is strong again.

Williams says the union wants more pay for the new hires, and will work with automakers to figure out how to get there while keeping the companies competitive.

But higher pay presents a quandary. If new hires at Ford, GM and Chrysler make more than workers at southern factories, Detroit's cars and trucks will be more expensive and they won't be as competitive. That could threaten union jobs.

In Detroit, workers aren't worried about the VW loss in Tennessee, or the financial pressures on the UAW, says George McGregor, president of a local union office at a factory that makes the Chevrolet Volt electric car. He thinks workers will approve the dues increase, which amounts to about one-half hour of pay per month. And he says the union will be back for another vote at VW.

"We'll try again another day," McGregor says. "It's not going to break the UAW."

Newcomb Spring of Colorado Moves to New Location in Denver

They fear a wave of resurrected fossil-fuel plants pumping out greenhouse gases.
Oct 18th, 2021
Follow Us
Most Recent