Republican Gov. Chris Christie has until Monday to decide whether to sign a closely watched bill involving pig cages — a piece of legislation seen by many as a gauge of his presidential ambitions. The bill would ban pig farmers in the state from using devices called gestation crates, which are metal... 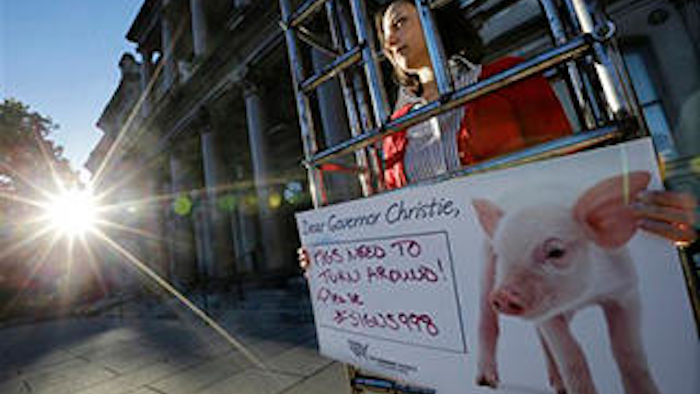 Republican Gov. Chris Christie has until Monday to decide whether to sign a closely watched bill involving pig cages — a piece of legislation seen by many as a gauge of his presidential ambitions.

The bill would ban pig farmers in the state from using devices called gestation crates, which are metal cages so small pregnant pigs can't turn around.

The contraptions are rarely used on New Jersey's 300 pig farms, but they're widespread in Iowa, a state that's home to millions of pigs — as well as the nation's first presidential nominating caucuses.

Christie, who is seriously considering a run in 2016, has invested significant time into building relationships in the state, including with GOP Gov. Terry Branstad, who has urged Christie to veto the legislation.

But animal rights advocates say the practice is cruel and want to stop it from spreading. To sway Christie, they've launched a public relations blitz, complete with celebrity endorsements, and staged events where activists stand inside cages. They've also commissioned polls to show support for the ban both in New Jersey and Iowa and say they've flooded the governor's office with thousands of phone calls and emails.

"I would say, with days left, we're cautiously optimistic that Gov. Christie knows, without a doubt, that New Jersey residents and everyone else are in favor of this bill," said Matt Dominguez, a public policy manager at the Humane Society. "If he vetoes this bill, there really can be no other reason than his political aspirations."

Dave Warner, a spokesman for the National Pork Producers Council, which sent a lobbyist to the state to try to scuttle the bill, slammed the effort as a politically motivated plot to try to build momentum for a nationwide ban.

"We think hog farmers ought to have the right to choose which system works best for their animals," he said, adding that signing it could have negative political repercussions.

"I'm sure that there would be an awful lot of hog farmers who wouldn't appreciate it," he said.

Among them is John Ymker, 65, who runs a pork plant and attended a fundraiser Christie headlined for congressman Steve King in northwestern Iowa before the election this fall. The bill would hurt pork producers, he said.

And why fighting everyday sexism enriches men too.
Jul 23rd, 2021
Follow Us
Most Recent