California Gov. Jerry Brown has indicated that he is likely to sign a bill imposing the nation's first statewide ban on single-use plastic bags as a way to address litter, primarily in waterways. Senate Bill 270 is one of the last major bills pending Tuesday, the deadline ... 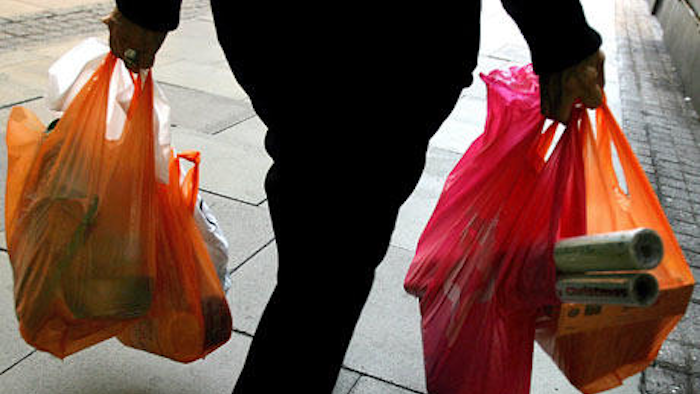 California Gov. Jerry Brown has indicated that he is likely to sign a bill imposing the nation's first statewide ban on single-use plastic bags as a way to address litter, primarily in waterways.

Senate Bill 270 is one of the last major bills pending Tuesday, the deadline for the governor to sign or veto the hundreds of bills sent to him during the final weeks of the legislative session.

The legislation will prohibit large grocery stores from carrying single-use bags starting in July 2015, expanding to smaller stores the year after. It also allows businesses to charge 10-cent fees to provide customers with reusable or paper bags.

More than 100 cities and counties, including San Francisco and Los Angeles, have their own plastic bag bans. State Sen. Alex Padilla, D-Los Angeles, says their successful implementation provided momentum for a statewide prohibition.

Breaking from the tradition of being tight-lipped about the fate of bills on his desk, Brown said during a gubernatorial debate earlier this month that he would "probably" sign SB270 because of the patchwork of local regulations regarding plastic bags.

"That's causing a lot of confusion," Brown said during the Sept. 4 debate with his Republican opponent, Neel Kashkari. "That's why the grocers themselves said, 'Let's have one statewide ban that's reasonable.'"

The bill had sparked one of the biggest battles of the legislative session, driven by plastic bag manufacturers determined to prevent the first statewide ban. Republicans and some moderate Democrats said SB270 would lead to manufacturing job losses and penalize low-income consumers by authorizing fees on paper bags.

Paper bag makers also targeted the legislation's standards for reusable plastic bags, which they say are not as eco-friendly as their products.