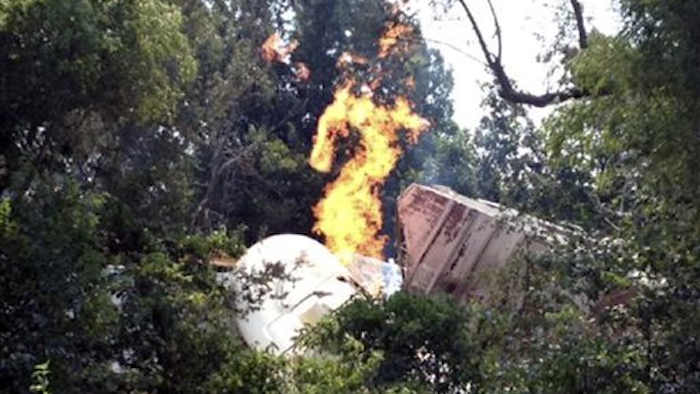 The collision happened about 3 a.m. in Hoxie, a small town about 90 miles northwest of Memphis, Tennessee. A resulting fire took about seven hours to extinguish, according to Union Pacific spokesman Brandon Morris.

Authorities asked about 500 people within 1½ miles of the collision to leave their homes following the crash because of the fire, the Lawrence County Sheriff's Office said. Most were allowed to return home by midmorning Sunday, according to county Emergency Management Director Buddy Williams.

"The fire involved diesel and also there was a tank car that ruptured and it contained an (unknown) alcoholic beverage," Arkansas Department of Emergency Management spokesman Kendell Snyder said. He said there were no other leaks.

"We don't know the cause of the accident. We have no idea why these trains were on the same line," Williams said, noting that no local residents were hurt.

Michael Hiller, an investigator for the National Transportation Safety Board, said the collision involved a train with two locomotives and 86 cars and another with two locomotives and 92 cars. The first train was northbound on a single main track when the second train, which was southbound, collided with it, he said. Hiller said they were operating on the same track.

Hiller said the cause of the accident has not yet been determined and he expects investigators to be on the scene about a week gathering evidence.

He said the daily recorders on the locomotives would provide information about speed, braking and throttle. Hiller said the recorders have been collected and will be shipped to Washington for analysis.

It's at least the second head-on collision involving UP trains since 2012, when two collided in the Oklahoma Panhandle that June, which killed three crew members and injured a fourth.

The names of those killed and injured on Sunday were not immediately released by Union Pacific. Hiller said he also did not have that information.

"We're still conducting an investigation, we haven't made any notifications," Morris said. He did not know where the trains had originated or where they were headed.

Morris said there were no other cars leaking any materials.

"There was a tank car carrying alcoholic beverages that caught fire," Hiller said. "It's still burning. It's going to burn itself out. It's not an environmental problem."

U.S. highways 67 and 63, main arteries through Hoxie and the adjacent town of Walnut Ridge, were closed for several hours Sunday. Highway 67 at the intersection with U.S. Highway 230 will likely remain closed for up to three days while the wreckage is removed, Arkansas State Police said.