The Canadian company that is developing an experimental Ebola drug says its product was not given to one of two American aid workers infected with the virus. 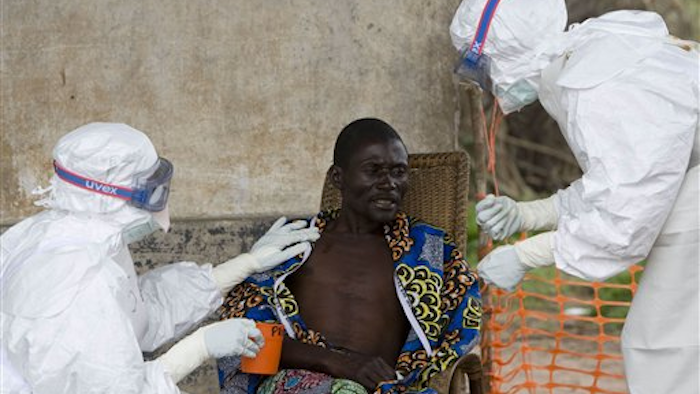 TORONTO (CP) -- The Canadian company that is developing an experimental Ebola drug says its product was not given to one of two American aid workers infected with the virus.

Tekmira Pharmaceuticals said in an email that no one infected in the ongoing outbreak in West Africa has been treated with its drug, called TKM-Ebola.

The Christian relief group Service in Mission or SIM said late last week that one of its missionaries, Nancy Writebol, had been given an experimental drug flown into Liberia, where she contracted the disease while working in an Ebola treatment facility.

Liberia, Guinea and Sierra Leone are battling a months-long outbreak that has infected at least 1,440 people and killed at least 826.

Another American, Dr. Kent Brantly, was also infected at the same centre in Liberia. Brantly works with the international relief agency Samaritan's Purse.

Its president, Franklin Graham, said in a statement last week that limited supplies of an unnamed experimental drug arrived at the facility. There was only enough to treat one person, and Brantly asked that the drug be given to Writebol, Graham said.

Although there are a number of Ebola therapies in development, Tekmira's is thought to be the furthest along in the regulatory process. And there has been some speculation among scientists that it was the one given to Writebol. Meanwhile, the price of the company's stock has soared as media coverage of the Ebola outbreak has intensified.

But Tekmira said Writebol did not receive their drug.

Based in Burnaby, B.C., Tekmira has been conducting a Phase I clinical trial in people. That involves giving a treatment to a small number of healthy volunteers to make sure it is safe to use in people and to establish what a human dose should be. These preliminary trials are too small to generate proof of whether a drug works.

TKM-Ebola is what is known as a small-interfering RNA compound. According to the company's website, these synthetic RNA molecules work by binding to the RNA produced by the virus, blocking its ability to make disease-causing proteins.

Because Tekmira is conducting a trial in people, the company would have some supplies of TKM-Ebola made to human-use standards, known in the pharmaceutical industry as "current good manufacturing practices" or cGMP.

Experimental drugs used only in animals do not have to be made following the stringent safety standards of cGMP regulations. Companies or government-funded research institutes still testing Ebola therapies only in animals may not have incurred the considerable expense of making human grade supplies of their drugs.

Tekmira's clinical trial was recently put on hold by the U.S. Food and Drug Administration, which asked for additional data related to an inflammatory reaction seen when the drug was given at higher doses.

Writebol is being transported back to the United States for care. She is set to arrive in Atlanta, Ga., early Tuesday where she will join Brantly at Emory University Hospital. The most recent update from SIM said Writebol is in serious but stable condition.

Brantly arrived at Emory University Hospital on Saturday. TV footage showed him gingerly stepping out of an ambulance and walking, with some assistance, into the building.

The hospital said Sunday it would not be updating the public on Brantly's condition due to patient confidentiality regulations and his family's wishes.

Emory, which is located adjacent to the main campus of the U.S. Centers for Disease Control, has built a special isolation unit to treat patients exposed to serious infectious diseases. The hospital's website says the unit is physically separate from other patient areas and has its own equipment and infrastructure which provides "an extraordinarily high level of clinical isolation."

The Emory facility, built in collaboration with the CDC, is one of only four such high containment treatment units in the United States.