A Missouri lawmaker who also leads an association of grocery stores is trying to stop cities and towns in the state from restricting the use of plastic bags, bucking a national trend toward banning their use to help the environment. The move comes as the city of Columbia, the home of the... 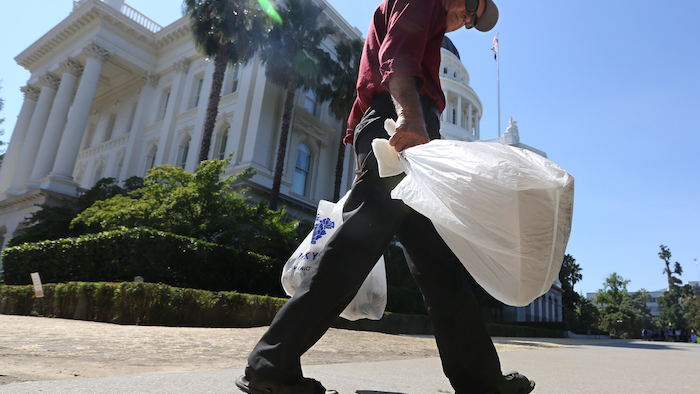 A Missouri lawmaker who also leads an association of grocery stores is trying to stop cities and towns in the state from restricting the use of plastic bags, bucking a national trend toward banning their use to help the environment.

The move comes as the city of Columbia, the home of the University of Missouri, considers a ban that would prevent grocery stores from offering plastic bags and would impose a 10-cent charge on paper bags.

Legislation by a state representative, who also serves as a board member of the Missouri Grocers Association, would stop that. A House panel is set to vote on the bill Tuesday.

Environmental activists have successfully pushed plastic bag bans in cities across the U.S., including Chicago, Seattle and Austin, Texas. Hawaii is also on track to have a de facto statewide ban, with all counties approving prohibitions.

California in September became the first state to enact a ban on single-use plastic bags in an effort to cut down on litter and protect marine life, although opponents of the ban have submitted signatures to the secretary of state's office to have a statewide vote on the ban.

Shaul, who also is state director of the Missouri Grocers Association, said it should be up to grocery stores and consumers to choose what bags they use.

He said sponsoring the bill while serving in the association is not a conflict of interest. The association's website says it, "monitors industry related bills and is actively walking the halls" of the state Capitol to represent members.

"It doesn't affect the organization, it affects the consumer, it affects the industry," Shaul said. "I mean sure, it could be a conflict if you want it to be. I don't think it is."

University of Missouri School of Law professor Richard Reuben said legally it may not be a conflict of interest.

"But from a standpoint of public perception it makes him look pretty bad," Reuben said. Missouri has relatively loose ethics laws for legislators compared to many other states, and lawmakers are considering measures to tighten them this session.

So far Florida is the only state that has halted local efforts to regulate the use of plastic bags, according to the National Conference of State Legislatures. Similar efforts in 2013 failed in Texas.

At issue is local control, said Columbia City Councilman Ian Thomas, who is in favor of a ban on plastic bags but said it might take time to gain more community support.

"The state ban on city bans is an enormous overreach," Thomas said. "It's important for individual cities that maybe have a different political outlook or a more progressive tendency to be able to approve this kind of legislation."

For more on this topic, check out "Banning Plastic Bags May Be Bad Science."