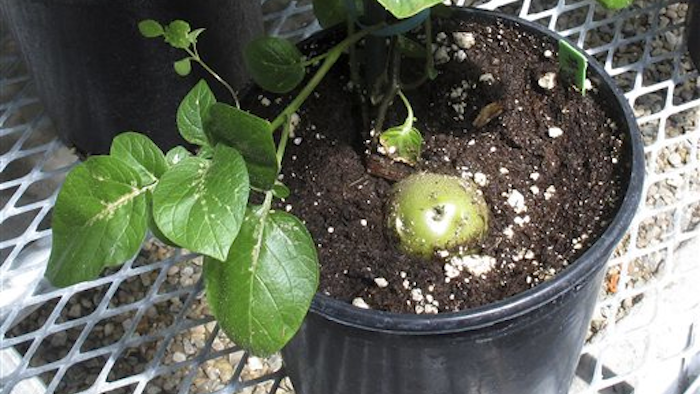 This month, tuber processing giant J.R. Simplot Co. asked the U.S. government to approve five varieties of biotech potatoes. They're engineered not to develop ugly black bruises — McDonald's, which gets many of its fries from Simplot, rejects those. They're also designed to have less of a natural but potentially cancer-causing neurotoxin, acrylamide.

Much has changed in 12 years, according to the Boise-based company.

Haven Baker, Simplot's Yale- and Harvard University-trained vice-president of plant sciences, said his scientists journeyed inside the vegetable's genome to "silence" unwanted attributes, while making sure it remained 100 percent potato.

"You'll never get as much beneficial effect from traditional plant breeding," he said. "And it'll take twice as long."

Those in the industry remember Monsanto's ill-fated foray and say Simplot's major challenge in avoiding a similar fate is ensuring its product is acceptable among growers, processors and, ultimately, people eating it.

"Unless your customers are prepared to embrace this product, it's not going to be successful," said Frank Muir, president of the Idaho Potato Commission that represents Idaho's $3 billion industry. His group, whose website currently boasts Idaho potatoes aren't genetically engineered, hasn't weighed in on Simplot's endeavor.

But Muir does think the company is making the right moves: Reaching out to the industry, as well as consumers who may eventually buy Innate potatoes as big, un-bruised bakers or golden fries. "They're taking all the appropriate steps."

As the USDA and Food and Drug Administration embark on vetting Simplot's potatoes, the agencies are nearing completion of a similar review of a genetically engineered apple created by a Canadian company, Okanogan Specialty Fruits, to resist browning when cut.

The apple industry has opposed Okanogan's "Arctic" apple, on grounds it could create marketing headaches for growers of unmodified apples. Christian Schlect, the Northwest Horticultural Council president, said he hopes the potatoes go to market first.

"We'd just assume the potato people take the initial foray on marketing this technology, and we'll follow their experience," he said.

In fact, the two products, should they win the government's blessing, could hit customers about the same time, 2015 or 2016.

Baker said with Simplot's new potatoes, growers would earn more money with less wastage from bruising, something that can affect up to 5 percent of their harvest. Additionally, the spuds are designed to produce acrylamide levels so low they skirt California's strict, voter-mandated cancer labels on french fries and potato chips, he said.

McDonald's didn't return a call seeking comment about the tubers. A big Simplot processing rival, ConAgra, says its potatoes are not genetically engineered.

Twelve years on, St. Louis-based Monsanto remains tight lipped about jettisoning its "New Leaf" potatoes — engineered, among other things, to kill Colorado potato beetles. That was a business decision "not influenced by any negative reaction to genetically-modified organisms," spokeswoman Carly Scaduto said.

But experts say plunging interest — including from Simplot, which told farmers in Idaho and North Dakota in 2000 to quit planting New Leaf potatoes after restaurants like McDonald's banished them from their fryers — drove the spuds from the fields. Monsanto's biotech potatoes, planted on 55,000 acres in North America in 1996, disappeared by 2002.

Joe Guenther, a University of Idaho professor of agricultural economics, in 2011 won funding from Simplot to survey potato industry players about re-introducing genetically engineered potatoes into the food chain. His conclusion: It could succeed, provided potatoes were modified with potato genes, not foreign microorganisms that in the 1990s spawned terms like "frankenfood."

"The Monsanto product crossed that species line," Guenther said. "The exciting thing about the Simplot product is, it stays within the potato species."

Another thing Guenther's 2011 report said would help was backing from an environmental group, something that remains a scarce commodity. Groups worried about corporations commandeering potato genes a decade ago remain no less alarmed.

While Simplot's Baker said 20 field trials demonstrate Innate potatoes exhibit characteristics virtually identical to their unmodified cousins, Freese painted a darker picture: Genetic engineering is a noisy, unpredictable process, where the best-intentioned genome tinkering could be accompanied by unforeseen effects on human health and the environment.

Freese said the absence of long-term animal feeding trials and labeling requirements is also cause for worry, since potatoes are staple crops people eat directly. Freese predicted Innate potatoes will fail, just like Monsanto's did.

"The question is why do they continue to so miscalculate public perception?" he said. "The biotech approach is to change the food on a genetic level in quite frankly risky ways with inadequate regulation to adapt a crop to an industrial food system that's really unhealthy in so many ways."

Simplot's Baker pointed to, among other sources, the FDA, which says genetically-engineered foods it reviews meets the same safety requirements as those from traditionally-bred plants. "The nutrients and allergens are no different from conventional potatoes," he said.

For instance, some Monsanto tubers found their way into Japan, where they weren't approved. After that, Japan-bound U.S. potatoes had to be tested, he said.

"If some parts of the marketplace are saying they don't want Innate technology and others want it, you've got to be able to address both of those issues." Keeling said. "Simplot seems to have taken to heart the thoughts that we had."

Simplot is seeking approval in Japan, as well as Canada, Mexico and South Korea.