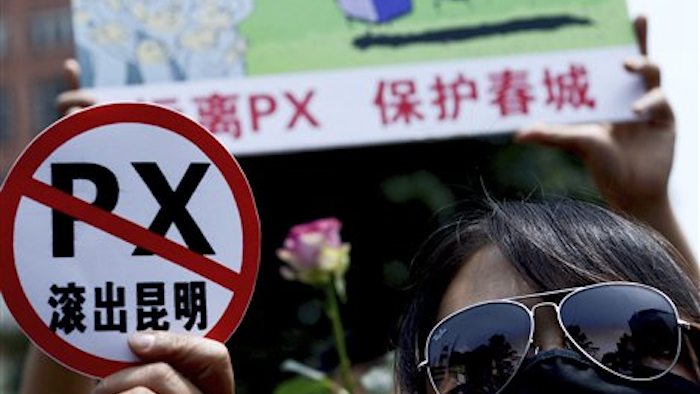 BEIJING (AP) -- After word spread about an environmental protest that was planned for Saturday in the central Chinese city of Chengdu, drugstores and printing shops were ordered to report anyone making certain purchases. Microbloggers say government fliers urged people not to demonstrate, and schools were told to stay open to keep students on campus.

And when Saturday came, thousands of police officers and security staff were on Chengdu's streets, some of them making a tight ring around a major public square. A weekend-long earthquake drill, officials said, but many residents didn't believe it. They said city officials pre-emptively quashed the protest over a petrochemical plant that a powerful state-owned enterprise is building about 40 kilometers (25 miles) northwest of Chengdu.

"What do they fear?" asked local resident Tina Zhong, contacted via China's social media. "If the government can share more information, the public would be less distrusting."

In the city of Qidong in eastern China, protesters against a wastewater discharge project last year even briefly occupied the local government compound and stripped a high-ranking official half-naked.

The reaction to the protest plans in Chengdu, provincial capital of Sichuan province, raises questions about whether China is getting tougher on dissent over environmental issues, though a protest Saturday in southern China saw less heavy-handed government tactics.

Hundreds of people — many wearing face masks — gathered in Kunming to protest a planned refinery project in the area. The demonstrators demanded information transparency and that public health be safeguarded.

That project and the plant near Chengdu are owned by PetroChina, the country's largest oil and gas producer. The plant being built northwest of Chengdu in Pengzhou is expected to produce 10 million tons of refined oil and 800,000 tons of ethylene per year.

Residents say they are worried the plant would pollute the air and water, and question why the plant is being built in a region prone to earthquakes. Pengzhou is in the same fault zone as the 2008 Wenchuan quake that left 90,000 people dead or missing, and for an earthquake last month that killed at least 196 people.

In Chengdu, local authorities have been taking pre-emptive measures to stop local residents from taking to the street.

At least one neighborhood police station has asked drugstores to report anyone buying large quantities of face masks, and for printing services to inform police immediately of those printing or photocopying materials with phrases such as "Petro Project," ''Environmental Protection," ''Personal Health," and "Pengzhou." The police demand that personal identity numbers and phone numbers of the customers be collected and reported.

A woman who answered the phone at the police station said the notice was issued in accordance with an order from the municipal government and its public security bureau. Officials contacted in the city government said they were unclear about the issue.

Eight Chinese microbloggers contacted by The Associated Press through private message also said the city government has been disseminating fliers urging its residents not to take part in any protest to preserve the city's stability — sometimes forcing signatures — and that several junior and high schools as well as colleges were asked to hold classes to keep the students on campus on Saturday. Most of the microbloggers refused to give their names, saying they feared how government officials would respond.

Yam, a local woman who declined to give her family name because of fear of retaliation, said her employer on Thursday asked its employees not to take part in protests and threatened them with punishment should they err, after her company's general manager was invited to a tea session with the city's propaganda officials. She said her friends at state-owned companies were threatened with expulsion if they should protest.

"I think the government has failed to give the public an open and just explanation but tried to avoid the issue and suppress it, making us to think even worse," she said.

On Saturday, police officers were seen being transported into key locations, such as Sichuan University and the Nine-Eye Bridge, in coach buses marked with the words "Public Security." They lined up along streets and ringed a major public square, spaced a few feet apart from each other, according to online photos and witness reports.

Some witnesses said security guards, traffic coordinators and neighborhood matrons were recruited to help keep order and that data services for mobile phones were briefly cut off around 2 p.m.

Calls to PetroChina rang unanswered Saturday. In a company statement carried in state media Saturday, it said the project has been approved by China's environmental protection agency and the National Development and Reform Commission, and that it has been evaluated for earthquake safety. It also promised to halt production should any environmental issue arise.

"Our employees live here with their parents spending their retirement years and their children growing up," the statement reads. "Like everyone else, we want the sky to be bluer, the water clearer, and the air fresher."

"The best place to solve the conflicts should be inside a town hall rather than in the street," said Ma. He added that any public demonstration against the petrochemical plant could be futile because more than 38 billion yuan ($6 billion) has already been spent on the project. "It's a done deal," Ma said.

He said the public needs to be able to learn the details about such projects and to participate in the decision-making process, which has been monopolized by governments and businesses seeking to maximize their profits. Environmental evaluations are also designed to support the projects, he said.

"With the rising public awareness on environment and the worsening condition, this must change," Ma said. "You have to respect each other's rights."