In a heavy industry, where potential hazards are numerous, reaching one million hours of safe operation is a remarkable achievement, and it’s one that Brown attributes not only to that “big stick,” but also a dramatic shift in company culture, simply by being aware of safety down to the smallest loose cable and scratched knuckle. 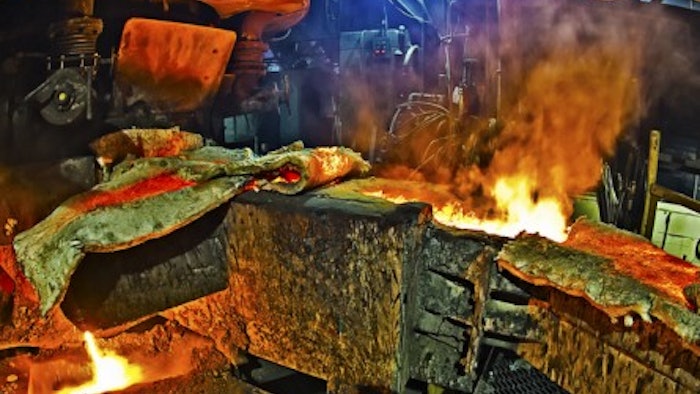 Bremen, Ind., is a small town of about 5,500 people roughly 15 minutes south of the South Bend/Elkhart area. And one of its major employers, Bremen Castings Inc. (BCI), has been around long enough, having been established in 1939, to gain a reputation of being one of the area’s best employers. And after more than 70 years of continuous operation, the company’s products in gray and ductile iron machined castings have gained a similar reputation worldwide for being made with the type of quality that has long been associated with American manufacturing.

But back in 2010, BCI’s executives and upper management decided its plant floor safety initiatives needed an overhaul. JB Brown, the company’s current president and fourth-generation employee, is quick to point out that the operations weren’t dangerous before, but strong growth and an increasingly public stature necessitated a more robust system to finding and resolving potential safety hazards. In 2010, BCI hired a safety manager and gave her a “big stick” to make serious results stick.

Because of those changes, the company recently celebrated achieving one million man hours without a lost-time incident, which is defined as an incident that resulted in a fatality, permanent disability or lost time from work. At press time, that equates to more than 700 days. And in a heavy industry, where potential hazards are numerous, reaching one million hours of safe operation is a remarkable achievement, and it’s one that Brown attributes not only to that “big stick,” but also a dramatic shift in company culture, simply by being aware of safety down to the smallest loose cable and scratched knuckle.

He says, “When I was a kid, we used to do a lot of things that probably weren’t very safe, and obviously today, things have changed, and the biggest [change] I’ve seen is that everyone is self-accountable. If someone isn’t being safe around them, people are speaking up and telling that person and guiding them. Guys I never thought would have said a word a day in my life are now going around saying, ‘That’s not safe.’ It’s pretty cool.”

One of the major drivers in the company’s safety-minded culture has been the use of “near miss” reports. These notifications, which take an employee no more than 30 seconds to fill out, cover potential safety hazards of all types, down to the seemingly minor misplaced extension cord. Employees were encouraged to fill these out for every possible safety hazard, and the report is sent out to BCI’s entire executive staff, including the Board of Directors.

Brown admits that at first, the influx of these reports was “crazy,” and that the number of e-mails being exchanged company-wide was overwhelming. But this awareness of every potential safety hazard — with every employee confronted with the problem — quickly ushered everyone into a new culture where fixing old problems just wasn’t good enough any more. Brown says plant floor employees quickly started actively looking for near miss reports to file, such as a forklift with a horn that isn’t putting out the required decibels.

The accumulation of near miss reports helped Brown and his team identify trends in safety management, whether they were processes, certain locations in the plant or even various teams. Of course, they were still focusing on the major hazards, which are inherent to the type of heavy manufacturing they do, but analysis of near miss reports increased awareness for smaller hazards, which executives or engineers might not be aware of. Brown says this is exactly what he hoped would happen, because, as he says, “It’s the small things that get you.”

With the near miss reports in place, BCI has, since 2010, been able to address a large number of possible safety incidents — emphasis on possible. By making all employees aware, at all times, of places where an accident could occur, such as a misplaced extension cord, the possibility of an employee tripping while carrying some heavy load, for example, has been preemptively quashed. But the near miss reports aren’t just responsible for patching up the small things. Brown says one of the most noticeable trends was foreign bodies in the eye. Because of BCI’s industry, there are often extremely fine pieces of metal in the air. The reports prompted safety teams to establish more stringent protocols, such as removing goggles in a particular way, but employees continued to have issues, even with goggles and eyeglasses on beneath them.

In the summer of 2012, BCI invested $5 million in a new grinding room that aims to reduce those foreign body run-ins. Over one weekend in July, the company pulled out all the grinding equipment and replaced them with an automatic delivery system that can place castings into the grinders. In addition, the manual cells, where employees most often had issues with those small metal fragments, were replaced by automatic ones, powered by FANUC robots. Despite what some believe about automation and robotics in manufacturing, BCI didn’t cut back on their labor force — the company just made it safer and more pleasant to be there.

In essence, Brown would recommend that manufacturers run their safety operations just like they would quality. Right now, BCI builds every new process around what they’ve learned in the three years since they implemented the near miss reports, just as most manufacturers build around the quality issues they’ve already solved in older processes. People need to be held accountable for the safety flaws that emerge through these reports, and to Brown, it’s not enough for them to say, “We’ll try harder next time.”

Brown says, “Well, there is no next time. It’s just like your customers. You have to have quality on-time 100 percent of the time, or you don’t have customers.”

And while the search for safety is never truly done, it’s clear Brown is proud of his employees for the work they’ve done already, and the shift in culture their efforts propagated. They’ve already reached the million man hour mark, which is a remarkable achievement alone, and with the proper culture in place, Brown and his team have already laid out the groundwork for another million, if not more.

He adds: “It’s a really good feeling to know everyone is watching out for everyone else, and that everyone is going home to safe. A lot of people say that, but being a family-owned business in a small community, we really truly do mean that.”