The suspensions by the U.S. Department of Agriculture and the fast-food chain came after an animal welfare group's video shot at a slaughterhouse operated by Central Valley Meat Co. showed cows that appeared to be sick or lame being beaten, kicked, shot and shocked in an attempt to get them to walk to slaughter. 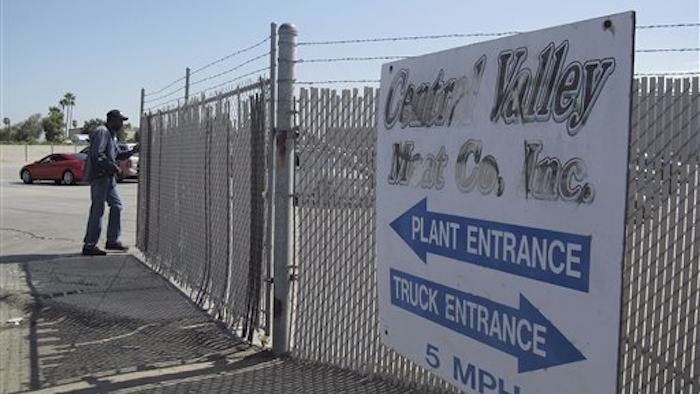 A security guard opens the gate at the Central Valley Meat Co., the California slaughterhouse shut down by federal regulators after they received video showing dairy cows being repeatedly shocked and shot before being slaughtered, on Tuesday, Aug. 21, 2012 in Hanford, Calif. (AP Photo/Gosia Wozniacka)

FRESNO, Calif. (AP) — Federal officials say nothing they have seen so far in covert video shot in a California slaughterhouse shows meat from cows that may have been sick made it into the food supply.

But the federal government and McDonald's Corp. have suspended purchases of meat from the facility.

The suspensions by the U.S. Department of Agriculture and the fast-food chain came after an animal welfare group's video shot at a slaughterhouse operated by Central Valley Meat Co. showed cows that appeared to be sick or lame being beaten, kicked, shot and shocked in an attempt to get them to walk to slaughter.

"There are behaviors in the video which appear to be unacceptable and would not adhere to the standards we demand of our suppliers," McDonald's said in release.

The video was shot in June and July by an undercover operative for the group Compassion Over Killing who worked at the plant and also gave a written statement to the USDA about events not on tape.

"We do know that workers were trying to make non-ambulatory cows not eligible for slaughter go to slaughter," said Erica Meier, executive director of the animal welfare organization. "We believe red flags are raised for sure with our video, but it's up to the USDA to decide."

It's against the law to slaughter a non-ambulatory animal for food out of concern that it could be infected with bovine spongiform encephalopathy, also known as mad cow disease.

The Hanford slaughterhouse is in the same city where a dairy cow at a rendering plant was discovered in April to have mad cow disease. The USDA said earlier this month it was an isolated case and didn't pose a threat to the food supply.

The USDA bought 21 million pounds of beef from the company in 2011 for the national school lunch and other federal food programs.

Records show the government made five large-scale purchases of ground and chunk beef, spending more than $50 million of the total $135 allocated by the government for such acquisitions that year.

USDA spokesman Justin DeJong said he did not know to which government food programs the beef was allocated. The meat generally goes to the national school lunch program and food distribution on Indian reservations, and is available for discount purchases by community food banks.

"The department works to ensure that product purchased for the federal feeding programs meets stringent food safety standards and that processors comply with humane handling regulations," the USDA said in a statement.

The New York Times reported that Costco Wholesale Corp. also suspended purchases. That company did not immediately return a call from The Associated Press seeking comment.

The USDA acted quickly to shut down Central Valley Meat Co. on Monday after the video documented the treatment of dairy cows.

The video appears to show workers bungling the slaughter of cows struggling to walk and even stand. Clips show workers kicking and shocking cows to get them to stand and walk to slaughter.

The video prompted the National Cattlemen's Beef Association to issue a statement.

"We firmly believe that those knowingly and willfully committing any abuse to animals should not be in the business — period," Dave Daley, a professor at California State University, Chico, said in the statement released by the marketing group. "The actions depicted in these videos are disgraceful and not representative of the cattle community."

Central Valley Meat Co. has referred all questions to a public relations firm that issued a statement saying Central Valley Meat is cooperating with investigators and developing a plan to remedy any potential violations of USDA guidelines.

"Based on our own investigation and 30 years of producing safe, high-quality US beef, we are confident these concerns pose no food safety issues," the statement said.

The video shows one man standing on the muzzle of a downed cow. Other footage depicts cows struggling after being repeatedly shot in the head with a pneumatic gun.

Federal regulations say slaughterhouses must be successful with a single shot.

Other clips show cattle with udders so swollen they are unable to keep their legs under them to walk, and workers trying to lift downed cattle using their tails.

Compassion Over Killing also provided the video to the district attorney's office in Kings County, where the plant is located. The office is following the federal investigation before deciding whether to file state cruelty charges.

The case has attracted the attention of Temple Grandin, a professor of animal science at Colorado State University and subject of a documentary about her life working with livestock behavior issues while she struggled with autism.

In a release distributed by the American Meat Institute, she said some video clips of cows twitching after being shot in the head with a pneumatic gun are normal reflexes, but she did note some problems.

"I did observe some overly aggressive and unacceptable use of electric prods with non-ambulatory cattle and in sensitive areas like the face," she wrote. "I would classify this as egregious animal abuse."