A New Jersey teenager left brain-damaged after being struck by a line drive while he was playing in a youth baseball game has settled his lawsuit against Hillerich and Bradsby. "The Domalewskis are still saddened by the tragic events of June 2006, but this settlement provides them with some relief and comfort that Steven will get the care he needs for the rest of his life," said the family's attorney. 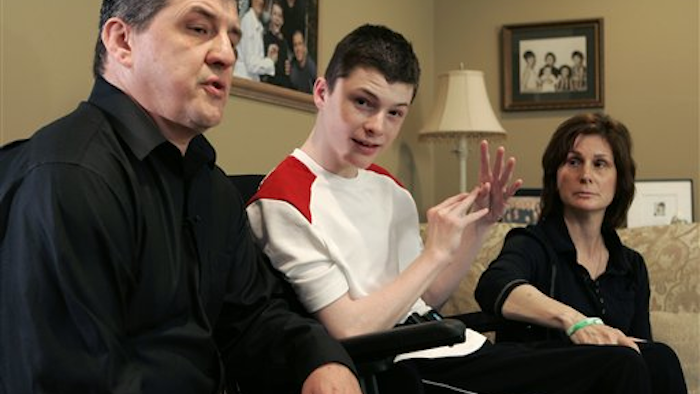 In this May 14, 2008, file photo, Steven Domalewski, center, sits with his parents Joseph and Nancy Domalewski during an interview at their home in Wayne, N.J. (AP Photo/Mike Derer)

A New Jersey teenager left brain-damaged after being struck by a line drive while he was playing in a youth baseball game will receive $14.5 million to settle his lawsuit against the bat manufacturer, Little League Baseball and a sporting goods chain.

The settlement of Steven Domalewski's lawsuit was announced in state Superior Court on Wednesday morning in Passaic County. The boy, now 18, lives in Wayne, N.J.

"The Domalewskis are still saddened by the tragic events of June 2006, but this settlement provides them with some relief and comfort that Steven will get the care he needs for the rest of his life," said the family's attorney, Ernest Fronzuto. "He still can't perform any functions of daily life on his own."

Fronzuto said the settlement precluded him from discussing its details, including whether any of the defendants admitted liability.

Domalewski was pitching when the batter rocketed a line drive off the metal bat he was swinging.

The ball slammed into Steven's chest, just above his heart, knocking him backward. He clutched his chest, then made a motion to reach for the ball on the ground to pick it up and throw to first base to get the runner out.

But he never made it that far. The ball had struck his chest at the precise millisecond between heartbeats, sending him into cardiac arrest, according to his doctors. He crumpled to the ground and stopped breathing.

His father, Joseph, a teacher who had been on the sideline with the rest of the team, said he and a third base coach from the other team both ran onto the field, where Steven was already turning blue.

Someone yelled, "Call 911!" Within 90 seconds, a man trained in cardiopulmonary resuscitation who had been playing catch with his 9-year-old daughter jumped over the fence and started to work on Steven.

Paramedics, who were a quarter-mile away doing a CPR demonstration, got to Steven within minutes, placed an oxygen mask over his face and rushed him to a hospital. But the damage had been done; his brain had been without oxygen for 15 to 20 minutes.

"Pretty much, he died," Joseph Domalewski said in a 2008 interview with The Associated Press. "It was just so fast. The thud, you could hear. When it hit him, that seemed to echo."

Domalewski was playing in a Police Athletic League game, but Little League was sued because the group certifies that specific metal bats are approved for — and safe for — use in games involving children.

Rick Redman, a spokesman for Hillerich and Bradsby, manufacturers of the Louisville Slugger brand bat, confirmed a settlement had been reached, but declined further comment.

An attorney representing The Sports Authority, the national sporting goods retailer, did not immediately return calls seeking comment, and an attorney who represented Little League Baseball in the case declined to comment.

Little league Baseball also did not immediately reply to messages left at its corporate headquarters.

Little League reached an agreement with the major manufacturers in the early 1990s to limit metal bats' performance to that of the best wooden bats. Little League said in 2008 that injuries to its pitchers fell from 145 a year before the accord was reached to the current level of about 20 to 30 annually.

Little League also said on its website that it has banned most metal bats for younger children for the 2012 season, although certain ones found to meet the organization's testing standards are allowed to be used. League divisions for older players can use metal bats subject to certain weight and size limits.