Nokia will lay off 10,000 jobs globally and close plants by the end of 2013 in a drive to save costs and streamline operations. 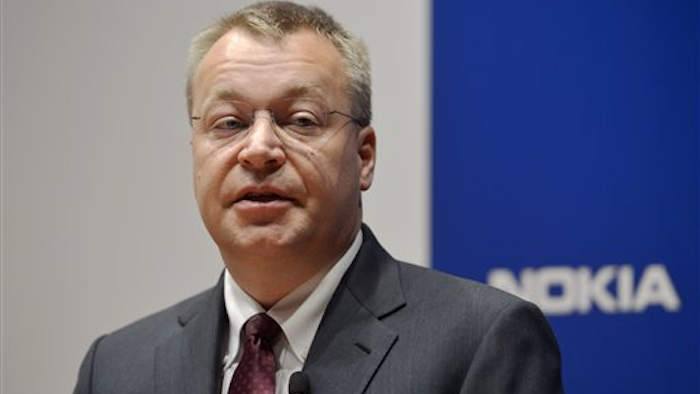 HELSINKI (AP) — Nokia says it will slash 10,000 jobs and close plants as the ailing company fights fierce competition, and gave a grim outlook for most of the year, causing its shares to plunge more than 15 percent to €1.88 ($2.37).

The Finnish cellphone maker also on Thursday announced personnel changes and said it has agreed to sell its luxury phone brand, Vertu.

"These planned reductions are a difficult consequence of the intended actions we believe we must take to ensure Nokia's long-term competitive strength," CEO Stephen Elop said. "We are increasing our focus on the products and services that our consumers value most while continuing to invest in the innovation that has always defined Nokia."

He said more than a third of the global job cuts, to be completed by the end of 2013, will be in Finland, but pledged to keep the company's corporate headquarters in Espoo, near the capital, Helsinki.

Nokia Corp. updated its outlook, saying that heavy competition would continue to hit its smartphone sector, but to a "somewhat greater extent than previously expected" and that the downturn would continue in the third quarter.

The loss-making company has been struggling against fierce competition from Apple Inc.'s iPhone and other makers using Google Inc.'s popular Android software, including Samsung Electronics Co. and HTC of Taiwan. It is also being squeezed in the low-end by Asian manufacturers making cheaper phones, such as China's ZTE.

Markets had been expecting Nokia to signal some improvement in its earnings expectations for this year after it joined forces with Microsoft Corp. in 2011, launching several Windows Phone 7 models, including its Lumia range. But its outlook bodes ill for the company that had been the No. 1 cellphone maker for 14 years.

The Espoo-based company said that although it plans "significant" cuts in operating expenses, it will continue to focus on smartphones as well as cheaper feature phones and intends to expand location-based services.

Nokia also announced that private equity group EQT VI had agreed to acquire Vertu, its global luxury phone brand, but that the Finnish company would keep a 10 percent minority shareholding. No financial terms were announced.

The company said it would also conduct an overhaul of its management team, with two long-time members of its top leadership - Mary McDowell, the head of the struggling mobile phones unit and Niklas Savander, head of the markets sector — leaving the company at the end of June. Chief marketing officer and brand manager Jerri DeWard, who joined Nokia in January 2011 will also step down.

Chris Weber, the current head of Nokia's U.S. operations, will take over sales and marketing on July 1.

In April, Nokia announced one of its worst quarterly results ever, blaming tough competition for a €929 million net loss in the first quarter as sales plunged, especially in the smartphone market. Last year, it was still the world's top cellphone maker with annual unit sales of some 419 million devices, but in the last quarter of the year it posted a net loss of €1.07 billion, a marked reverse from the 745 million profit a year earlier.

Boston-based Strategy Analytics said Nokia had significantly lost market share in the first quarter to Samsung, which pushed it out as the world's largest seller of cellphones by volume, grabbing a 25 percent global market share against Nokia's 22 percent.

It has fared even worse in the smartphone sector against Samsung and Apple by falling to third place in the first quarter of the year with sales of 12 million units against Samsung's 44.5 million and Apple's 35 million.

"Nokia is significantly increasing its cost reduction target for devices and services in support of the streamlined strategy announced today," said CFO Timo Ihamuotila. "With these planned actions, we believe our devices (and) services business has a clear path to profitability. Nokia intends to maintain its strong financial position while proceeding aggressively with actions aimed at creating shareholder value."