Michael Dingman has spent much of his life collecting vintage Fords and restoring them, and now some of them are worth nearly $300,000. 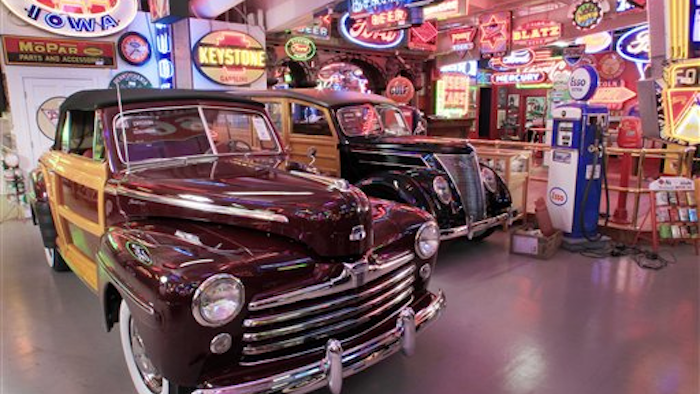 In this photo taken Wednesday, June 6, 2012 in Hampton, N.H. a 1940 Standard Station Wagon is seen ready for auction along with neon signs. (AP Photo/Jim Cole)

CONCORD, N.H. (AP) — Michael Dingman has spent much of his life collecting vintage Fords and classic neon signs, restoring and keeping them well-preserved for years. Now, the former Ford Motor Co. director is ready to share his slice of Americana with others.

Nearly 50 cars, many of them from Ford's flathead era, and well over 1,000 signs are up for auction this weekend at his property in Hampton, N.H.

Dingman, a businessman and investor who was Ford director for more than 21 years and also raced cars, sees himself as a student of Ford history. He said in a recent interview with the auction house that he enjoyed thecar hunt and grabbed the best convertibles, woodies and others he could find through the years.

"In the Ford world, the V-8 flathead Ford is like up on a pedestal," said Michael Fairbairn, co-founder of RMAuctions Inc. "It may not be the fastest, it may not be the prettiest," but it draws car collectors. "It's what's in their blood. It's what they think of when they think of a great Ford." Dingman bought and restored them.

"He really loves these cars, wants to make them the best he can and views it almost as a calling in life to leave behind almost as many great ones as he can," Fairbairn said.

One of his most prized cars, estimated at $225,000 to $275,000, is a rare, restored 1936 Ford custom Cabriolet by Glaser, the coachbuilder of choice for "deluxe" Fords in Europe. The black car with chrome trim and directional signals on the windshield pillars was recognized at the Pebble Beach Concours d'Elegance in 2011 where it won its class.

Another is a 1947 Ford Super Deluxe Sportsman Convertible estimated at $240,000 to $280,000, representing the epitome of Ford's open woodies. The frame wood in the body was removed, stripped, sanded and repaired, and the panels were refinished.

The oldest car up for auction is a blue 1934 Ford Deluxe Phaeton, used as a vacation car at the family's property in Nassau, Bahamas.

For those looking for a newer car, there's the very first 2005 Ford GT, estimated at $325,000 to $375,000. The black car with silver stripes was offered to Dingman by the Ford Motor Co. in appreciation of his years of service.

Other items in the auction include a pair of Porches, an Aston Martin Vantage Volante and a Prevost XL40 Conversion Motor Home with kitchen trailer, which was converted for Dingman to use during his racing career.

While there are many automotive signs and posters in Dingman's collection, there are also ones for soft drinks, beer and other products. In addition to the neon ones, they are made of tin, porcelain, wood and glass. The collection also includes a series of Route 66 signs.

"When I was growing up, you saw neon signs everywhere," said Dingman, 80. Now, most have disappeared. "I wanted to capture that period."

This is the second auction of cars and signs collected by Dingman. The first was in 2006 at Dingman's farm in Kensington, N.H., and brought in about $5 million. This weekend's auction is expected to be in the multimillion-dollar category, as well.

The auction has attracted interest from as far away as the Middle East. A preview was being held Friday and the auction itself Saturday and Sunday. Bids also will be accepted by phone and on the Internet, where it will be streamlined on the auction house's website.