The Attorney General said the only new arguments against the right-to-work law are that it violates the 13th Amendment, which outlawed slavery and involuntary servitude. 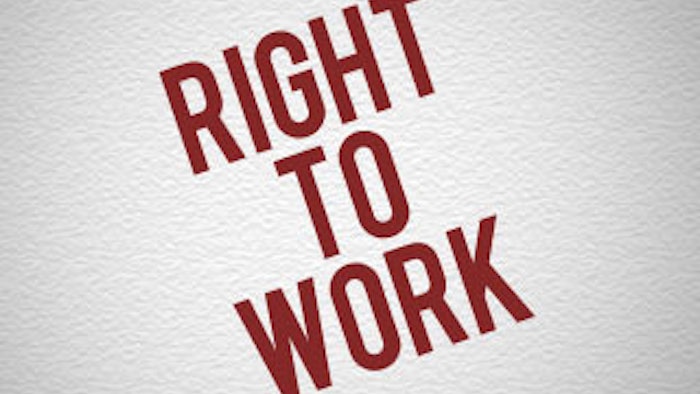 HAMMOND, Ind. (AP) — State attorneys asked a federal judge Tuesday to bar a union from amending its lawsuit challenging Indiana's new right-to-work law, arguing that most of the new claims are the same as those in the original complaint filed in February.

Indiana Attorney General Greg Zoeller argued that the International Union of Operating Engineers Local 150's request was futile and "fails to state a claim on which relief may be granted." A message left with the union's attorney seeking comment wasn't immediately returned.

Gov. Mitch Daniels signed the right-to-work law on Feb. 1, making Indiana the 23rd state to ban unions from collecting mandatory fees for representation. The union, which has about 4,000 members in northwest Indiana, filed a lawsuit Feb. 22 challenging the law, calling it unconstitutional.

Zoeller said the union's only new arguments are that the right-to-work law violates the 13th Amendment, which outlawed involuntary servitude, and a challenge to the definition of the word "employee" found in an emergency rule.

He argued that requiring dues-paying union members to work alongside non-union personnel "is compulsory service and/or involuntary servitude within the meaning of the 13th Amendment." The state also noted that people have the right to work elsewhere or not to work at all.

The state also contends that the union's argument over the definition of an employee in an emergency rule expires on June 13, and that there is a good chance by the time a court rules on the matter that the rule would no longer be in effect.

The state's motion also argued that Zoeller and Daniels, who were both named as defendants, should be immune from the lawsuit.

HAMMOND, Ind. (AP) — In a story May 2 about a federal lawsuit challenging Indiana's new right-to-work law, The Associated Press erroneously reported that the state attorney general argued the law would violate the 13th Amendment, which outlawed slavery. The union challenging the law contends requiring dues-paying union members to work alongside non-union personnel constitutes involuntary servitude, but the attorney general says that argument is flawed.