IMPO Onsite: Rising To The Occasion

Oregon-based Dave's Killer Bread, which recently expanded its distribution to all 50 states, prides itself on its hand-crafted/seed-encrusted line of breads. 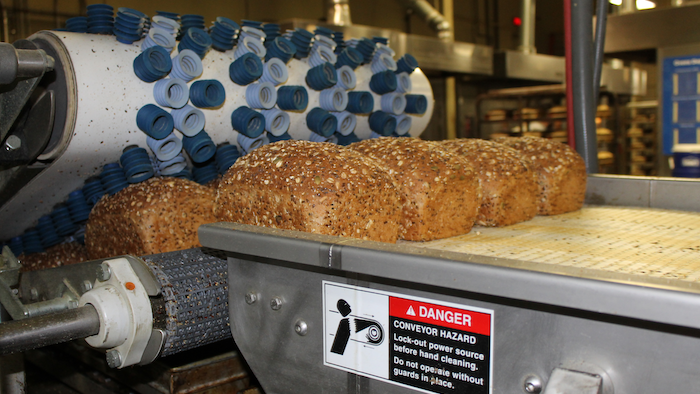 This article originally appeared in the August print issue of IMPO Magazine. To view the digital version, click here.

Its legions of fans — affectionately referred to as the BreadHead Nation — call it the best bread in the universe. Dave’s Killer Bread is an all-organic, Non-GMO Project Verified bakery located in Milwaukie, OR — a small suburb located just minutes away from downtown Portland. With 16 nutrition-packed varieties of bread, DKB prides itself on its hand-crafted/seed encrusted line of breads. While the products may taste distinctly different from one another, they each come power packed with protein, Omega 3s, seeds and a handful of all-organic ingredients, including amaranth, barley, blue cornmeal, spelt and quinoa.

“When we started out it was really ‘Let’s make some breads with the most seeds. The most seeds, the most grains.’ You know some breads are just like ‘The 9 Grain’ or ‘The 12 Grain,’ well it’s like you know what? We’re going to do better. Straight up, we’re going to have the most,” Dan Letchinger, Product Manager, Dave’s Killer Bread, says. “Our founders really hit to a lot of grain and seed and superfood trends before they were even trends. Quinoa, spelt, stuff like that. It was already sort of in our wheelhouse, and we were just like, ‘Let’s find them organically and let’s make bread with them.’”

And that’s exactly what DKB did.

With more than 300 employees and a 24/7 operation, the 49,000 squarefoot “Breadquarters” produces around 550,000 loaves of bread in a week. And that number, Letchinger says, is constantly growing. “I remember when I first started here eight years ago and we would bake 2,000 loaves in a day and we were dumfounded. It was like, ‘Oh my God! That’s so much bread. Can you believe it?’ And now it’s like half a million a week.”

Sprouting to the Top

While Dave’s Killer Bread really didn’t flourish until 2005, the history of the family bakery dates back to 1955, when Jim Dahl purchased a small bakery in Southeast Portland. The business, called Midway Bakery, quickly gained followers for its sprouted, whole grain breads. It wasn’t long before Dahl and his wife Wanene’s first child, Glenn, began working in the bakery, along with their younger children Linda, Al and Dave.

While the rest of the family found passion and excitement in the bakery, Dave Dahl admitted to having no devotion for his family’s business. Struggling with severe depression, Dave found his release in methamphetamines, leading him to a life of incarceration. With Dave serving time in jail, Glenn took the lead and began running the family business. In 1984, he changed the name to NatureBake and then officially purchased the business from his father in 1988. Glenn’s son, Shobi, also began to work for the bakery, just like Glenn and his siblings (including Dave) had years earlier.

It was about three years into his last jail sentence that Dave found his turning point. In 2001,the turned to prescription medication to help cope with his depression. He found help in vocational training for computer-aided drafting/machining and passed the next couple of years by helping design furniture, modular housing and machine parts for the Construction Tech program at the Snake River Correctional Institution. Due to his continued improvement, Dave was accepted into a drug treatment program in 2003 and released early from his term on Dec. 27, 2004.

After spending 15 years in prison, Dave was welcomed back into the family business by his big brother Glenn. “Fifteen years in prison is a pretty tough way to find one’s self, but I have no regrets,” Dave says. “When I was given this opportunity at the age of 43, I was ready for it.” And with his newfound desire to turn his life around, Dave’s story of redemption is nothing short of amazing. He was given no special privileges and was told to work his way up the totem pole, but with his dedication he quickly established himself as a creative force for NatureBake.

After reformulating the company’s cookie line to eliminate the use of Trans fats and animal products, Dave set his sights even higher. He was tasked with the job to create a nutrition-dense bread that uses only the best type of organic ingredients available. “They knew that the breads they had been making since 1955 weren’t necessarily competitive with the younger set, and so Dave was given license to go create a new recipe,” Genevieve Martin, Community Development Manager, says.

Then the magic happened. The four varieties that Dave created were Blues Bread, Nuts & Grains, Good Seed and Rockin’ Rye. Dave, along with his nephew Shobi, who had recently graduated from Willamette University with a degree in Economics, wasted no time in sharing these products with the public. So in August 2005, Dave’s Killer Bread launched at the Portland Farmer’s Market. It happened to be a “Summer Loaf” artisan bread festival so there were many competitors, but DKB certainly stood out among the crowd.

It was this opportunity to introduce the new breads that was vital to the rise of Dave’s Killer Bread. Business boomed and the Dahls were getting phone calls left and right from people wanting their bread. By that same fall, Dave’s Killer Bread products appeared on shelves of Portland retail- ers, including New Seasons, Whole Foods and Fred Meyer.

During its rise to fame, the company only had about 35 employees and was producing about 2,000 loaves per day. Dave’s Killer Bread has come a long way on its journey to the top, as today the bakery employs about 300 workers and produces half a million loaves during an average week. Letchinger says between 2010 and 2014 the company’s compounded annual growth rate sits comfortably around 34 per- cent. “When you're growing as much as we are, you have to be able to kind of roll with it, and it can be stressful,” Letchinger says.

The “World Breadquarters,” located at 5209 SE International Way, is where all the magic happens. The production facility takes up the majority of the space with 25,000 square-feet, while an in-house ingredient warehouse helps to hold 10,000 square-feet of flour and organic materials. “This supply is always coming in and out,” Enfield says. “There are 2500-pound bags of flour stocked all over the warehouse. It's a pretty powerful visual.” The main site also contains an employee café, The Healthy Bread Store and a newly built Research and Development test kitchen. The state-of-the- art R&D area opened in July 2014 and is used to evaluate and experiment with new ingredients and processes.

“We want to be a brand that's constantly innovating and that can be difficult when it's like, 'Let's make this bread, let's make it and expand,'” Letchinger says. “There's sort of a tension in there though because when you're innovating, it can get inherently risky. So we were very fortunate to have a leadership team that saw the value in (building a new test kitchen). It would be very easy for us to say we are just going to make 21 Whole Grains and Good Seed, expand everywhere in the country and rest our laurels there, but that's not the kind of brand that we want to be. We have innovative spirit.”

While Letchinger wasn't able to reveal whether or not Dave's Killer Bread has another creation in the works, he did declare that the company is “not a sleepy brand.” With a top-notch R&D staff, food scientists and some of the best bakers in the world, Letchinger says that the team is always throwing around ideas. In March 2014, the Seeded Honey Wheat was the first new product launch in two or three years. At that time, honey wheat breads were all the rave, so the brand decided to play off that trend. “We knew it was a real- ly popular flavor, but we wanted to do it differently,” Letchinger says. “So we were like, ‘Uh, why don't we make it taste like there is actually honey it?' Because most of those breads are just sort of generically sweet, so we put 3.5 tablespoons of organ- ic honey into each loaf. Each loaf! That's a good amount of honey.” And since then, DKB has introduced about six new varieties a year, including its first white bread.

From ideation to building a marketing and sales business case to deciding where to source the ingredients from, rolling out a new product is no easy task. “Of course there are hiccups along the way, as there are in any organization. We're pretty scrap- py around here — you have to be when you grow this much. You just have to be like, 'Let's get after it,’” Letchinger says.

While the plant is highly automated, all the dough is hand-woven for perfection. Each ball is then manually rolled, dipped and sewed in with the various seeds and grains. Many of the organic ingredients make it tough to run through the auto- mated equipment, so Dave's Killer Bread has found a happy marriage of people and machinery. “We couldn't do it without the people,” Letchinger says. “Symbolically, but also like literally from a formulation standpoint, we need that.”

Every three hours or so, the production cycle changes to include a different prod- uct — meaning a new variety of wheat. With each wheat change, the protein levels fluctuate, keeping the mixers hard at work. Without the luxury of added chemicals to help the dough run through the machines, the DKB team is constantly performing mix tests. “There's a very tactile way of making this bread. There's a lot of feel involved. Our mixers always have to be on top of their game because the margin for errors is very small with these seeded breads,” Letchinger says.

Dave’s Killer Bread is currently the number one organic bread brand in the U.S. and the number 20 bread brand over- all. The breads can be found in thousands of retailers nationwide, as the company officially announced its expansion into all 50 states in May. DKB products can now be found in stores like Kroger, Safeway, Costco, Sam’s Club, Whole Foods, Fred Meyer and a handful of independent and natural retailers.

DKB is notorious for keeping tabs on consumer trends when developing new products, and Letchinger said grains and seeds are a great way to bring their nutrition story to the forefront. “There’s still quite a bit of momentum for a clean label and we feel comfortable on delivering on that promise with these breads. That kind of guides whatever we do when it comes to innovation. All the consumer and retail trends are pointing in that direction, so it’s very important for us to not lose sight of that. We’re a transparent brand, we make clean-label products. That’s not going to change any time soon.”