The taxpayer-funded bailout is currently the subject of a $60 million federal bribery case. 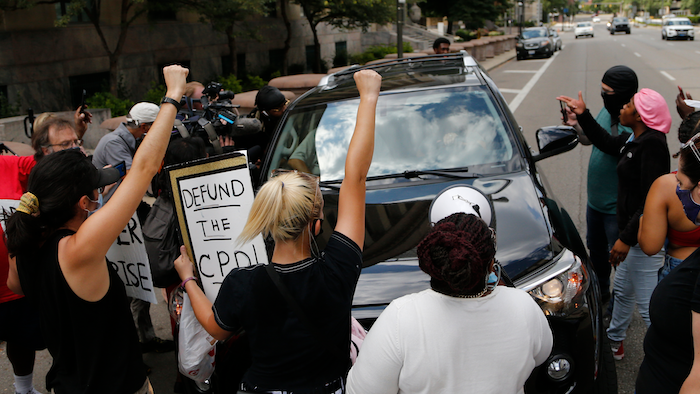 COLUMBUS, Ohio (AP) — A nuclear plant bailout law should remain in place, Republican Gov. Mike DeWine said Wednesday, even as a bribery scandal involving one of the state’s most powerful lawmakers unfolded over the law’s passage and both Democratic and GOP lawmakers called for its repeal.

DeWine's comments came a day after Larry Householder, the Republican speaker of the Ohio House, and four associates were arrested in a $60 million federal bribery case connected to the taxpayer-funded bailout.

U.S. Attorney David DeVillers described the ploy as likely the largest bribery and money-laundering scheme that has “ever been perpetrated against the people of the state of Ohio.”

DeWine said he's long advocated for a balanced energy policy for Ohio, which includes the carbon-free energy provided by the state's two nuclear power plants. He said he was also concerned about the jobs that would be lost if the plants were closed.

DeWine, who signed the original bill, said it had been obvious that a lot of money was being spent on supporting the bailout and then stopping an attempt to repeal it at the ballot.

“There was no indication that anything illegal was going on,” the governor said.

DeWine said he first learned of the scandal Tuesday and no one in his administration has been contacted by investigators. His office has no involvement in the scandal, the governor said.

Householder was one of the driving forces behind the nuclear plants’ financial rescue. Previous attempts to bail out the nuclear plants had stalled in the Legislature before Householder became speaker. Months after taking over, he rolled out a new plan to subsidize the plants and eliminate renewable energy incentives.

"When corruption is revealed, it is important we act quickly to fix what has been broken,” Rep. Michael Skindell, a suburban Cleveland Democrat, said Wednesday. Senate Democrat Cecil Thomas of Cincinnati also called for its repeal.

The 2019 law added a new fee to every electricity bill in the state and directed over $150 million a year through 2026 to the plants near Cleveland and Toledo. The bill faced fierce opposition from both clean energy groups and manufacturers.

FirstEnergy Solutions, the subsidiary that operated the Ohio nuclear plants before it emerged from bankruptcy earlier this year under a new name, sought help for its struggling operations from the Trump administration too.

The company unsuccessfully lobbied administration officials for a bailout worth billions of dollars to prop up its coal and nuclear plants.

FirstEnergy shares fell $7.16 to $27.09 on Wednesday, a day after the bribery charges were announced.

Repealing the law quickly won't be easy, and is complicated by support the law received in the House, both from Householder-backed Republicans and Democrats persuaded to support the measure.

Meanwhile, even before the scandal erupted, the Householder-led House was on summer recess, and the speaker had declined to bring lawmakers back before fall. The Senate has been conducting sessions.

Republican officials from DeWine on down have called on Householder to resign, including at least seven GOP House lawmakers as of Wednesday afternoon. The speaker, who could continue to hold office unless he were convicted, has remained silent regarding those demands.

A vote by two-thirds of the House could result in the expulsion of a member for disorderly conduct under the Ohio Constitution, Republican Attorney General Dave Yost, who also called on Householder to resign, tweeted Wednesday morning. In addition, the Constitution allows the governor to call the General Assembly together “on extraordinary occasions,” Yost said, noting: “This is that.”

DeWine said he would consider calling the Legislature back in session if necessary.

The investigation is the second major case brought against a utility within the past few days.

While Madigan denied any wrongdoing and has not been charged, prosecutors said the company admitted that from 2011 to 2019 it arranged for jobs and vendor subcontracts “for various associates of a high-level elected official for the state of Illinois.”