Critics say the rule could make it harder to block projects over water quality concerns. 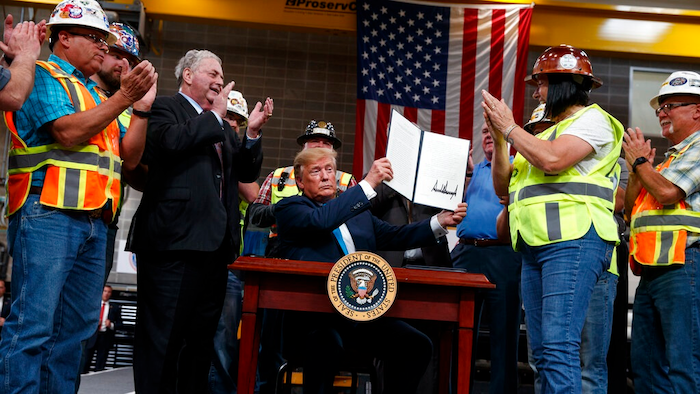 In this April 10, 2019, file photo, President Donald Trump holds up an executive order on energy and infrastructure after signing it at the International Union of Operating Engineers International Training and Education Center in Crosby, Texas. Attorneys general in 20 states and the District of Columbia sued the Trump administration on Tuesday, July 21, 2020, alleging that new federal rules undermine their ability to protect rivers, lakes and streams within their borders. President Trump in April 2019 issued an executive order directing the change that critics said could make it harder for states to block pipelines and other projects over concerns that they could impair water quality.
AP Photo/Evan Vucci, File

SACRAMENTO, Calif. (AP) — Attorneys general in 20 states and the District of Columbia sued the Trump administration on Tuesday, alleging that new federal rules undermine their ability to protect rivers, lakes and streams within their borders.

President Donald Trump in April 2019 issued an executive order directing the change that critics said could make it harder for states to block pipelines and other projects over concerns that they could impair water quality.

“The Trump administration wants to clear the deck for fossil fuel infrastructure,” California Attorney General Xavier Becerra alleged in announcing the legal action, the latest of dozens he has filed against the administration.

Becerra added: “By reducing the scope and time (for review), they make it very difficult for states to fully protect the rights that they have to protect the water that is in their boundaries.”

The EPA declined direct comment on pending legislation, but said in a statement that it acted because its water quality certification regulations were nearly 50 years old.

The revision “reflects the first comprehensive analysis of the text, structure and legislative history” of that portion of the Clean Water Act, the agency's statement said.

“As a result, the agency’s final rule increases the transparency and efficiency of the ... certification process in order to promote the timely review of infrastructure projects while continuing to ensure that Americans have clean water for drinking and recreation,” the EPA said.

The lawsuit led by California, New York and Washington state claims that the regulation changes violate the federal Clean Water Act and decades of legal decisions and administrative precedent. It was filed in federal court in San Francisco and alleges that the EPA did not follow proper procedures in changing the regulations.

Virginia Attorney General Mark Herring said in a statement that the new final rule "unlawfully restricts the ability of states like Virginia to even review, let alone impose important conditions and environmental protections, on projects that could cause harm.”

The rule applies to all projects requiring federal approval that may result in polluting of waterways. States were required to certify that the projects satisfied state law and water quality standards.

He said that states might still be able to prohibit projects from polluting rivers, for example, but under the changes could no longer require minimum stream flows below federal dams and reservoirs “so we actually have a river.”

The changes are among several steps the Trump administration has taken to roll back the Clean Water Act, including ending federal protection in January for many of the nation’s millions of miles of streams, wetlands and arroyos and wetlands. That change narrowed the types of waterways that qualify for federal protection.