Crude prices are down more than 30% this year. 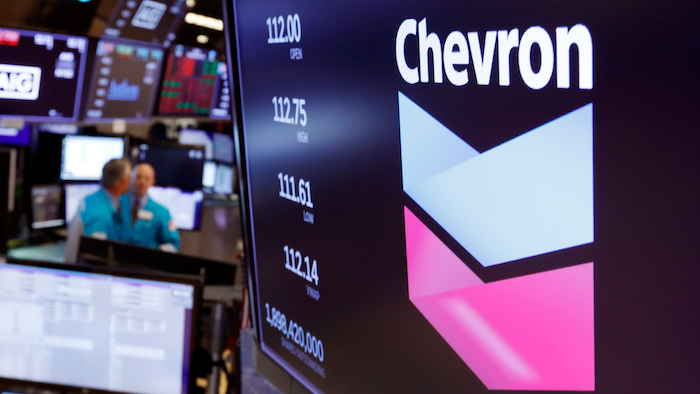 Chevron logo appears above a trading post on the floor of the New York Stock Exchange.

NEW YORK (AP) — Chevron will take over Noble Energy for $5 billion in the first big deal announced since the coronavirus pandemic shook the energy sector.

Chevron has been shopping for assets since last year and with crude prices down more than 30% this year, it jumped Monday with its all-stock offering for the independent Houston oil and gas driller.

Energy companies had been taking on enormous debt even before the pandemic with energy prices have bouncing all over the place. Noble is no exception.

The total enterprise value of the deal is $13 billion, with Chevron assuming Noble’s debt.

Other big players, seeking to cut costs and load up on assets, will likely follow Chevron's lead, said Gianna Bern, a finance professor at the University of Notre Dame’s Mendoza College of Business.

“This is the first wave of acquisitions," Bern said.

Last year, as it pursued potential buyout targets, Chevron lost out when Occidental Petroleum made a $38 billion deal for one of them, Anadarko, even though Chevron is five times the size of Occidental.

While Occidental's valuable holdings in the Permian Basin of west Texas and New Mexico appeared to be a good match, Chevron said at the time that it favored discipline over “winning at any cost.”

It's found another match in Noble Energy.

The acquisition brings to Chevron low-cost, proven reserves in addition to cash-generating offshore assets in Israel, strengthening the company's position in the Mediterranean. Noble's portfolio will also add to Chevron’s U.S. acreage in the Permian Basin and in Colorado’s DJ Basin.

That discipline is mandatory for any company in the energy sector this year.

On Monday, energy services company Halliburton reported a quarterly loss of about $1.7 billion, and that was better than industry analysts had expected. The 57% plunge in revenue was not.

Energy demand has bounced back as economies reopen globally. U.S. crude prices that fell for first four months of the year are gaining ground, and have been positive since May. It appears prices may remain positive for July, but prices are seesawing and the longest positive streak this month has been two days.

Surging cases of COVID-19 in the U.S., the world's largest economy, now threaten to hamstring an industry already hit hard by layoffs.

Chesapeake Energy, a shale drilling pioneer that was once one of the largest natural gas producers in the world, filed for bankruptcy protection last month.

Shares in Noble rose 5% Monday, but crude was weak, heading closer to $40 per barrel.