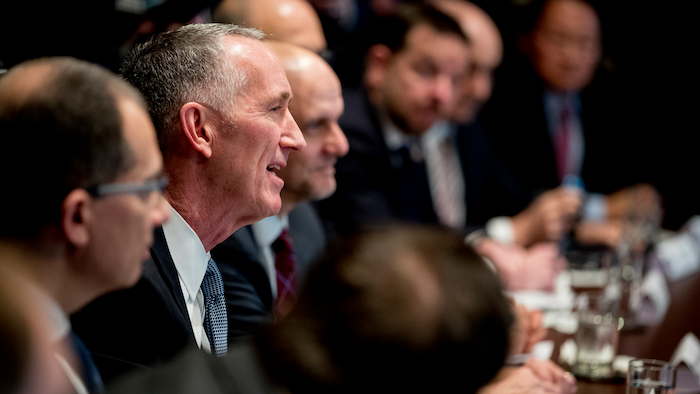 Gilead Sciences CEO Daniel O'Day speaks at a meeting with President Donald Trump, members of the Coronavirus Task Force, and pharmaceutical executives in the Cabinet Room of the White House in Washington.
Associated Press

WASHINGTON (AP) — The pharmaceutical giant that makes a promising coronavirus drug has registered it as a rare disease treatment with U.S. regulators, a status that can potentially be worth millions in tax breaks and competition-free sales.

What that specialty status will actually mean for the marketing or profitability of Gilead Science's experimental drug remdesivir isn't clear. The drugmaker did not immediately respond Tuesday to requests for comment.

Experts who have studied the so-called “orphan drug” program say the company's request — and the Food and Drug Administration's decision to grant it — seem inappropriate given the rapidly expanding threat of the viral outbreak.

The FDA granted the status on Monday, according to the agency's website. If approved for coronavirus, Gilead Sciences would receive seven years of exclusive U.S. marketing for the drug and tax credits on its research and development costs.

Congress created the orphan drug program more than 35 years ago to encourage companies to develop drugs for niche diseases and conditions that might not otherwise be profitable. But since then, filing for orphan status has become a standard pharmaceutical industry tactic to extend the profitability of drugs and block competitors. Orphan drugs are also typically eligible for other special programs that speed up FDA reviews for approval.

The FDA defines a rare disease as one with fewer than 200,000 patients in the U.S. In a statement Tuesday, the agency said COVID-19 fit that criteria when the request was made. There are more than 50,000 cases in U.S. but many more expected in the coming weeks and months.

“It seems like a misuse of the Orphan Drug Act, even though technically it’s within the bounds of the law,” said Dr. Aaron Kesselheim, a Harvard Medical School health policy expert. “There’s no expectation here that this drug wouldn’t be able to generate appropriate revenue for the manufacturer.”

Kesselheim said a number of the early AIDS drugs also received orphan drug status in the 1980s and 1990s, but then went on to generate billions in sales.

“It says nothing about profiting off of the pandemic, but it does provide protection if remdesivir turns into a business in subsequent years," he said.

In recent years the orphan drug program has come under scrutiny from the media, Congress and government inspectors amid concerns that it is being misused to protect six-figure prices on specialty drugs. Roughly half of the 48 new drugs approved by the agency last year received orphan drug designation. Many were priced well above $100,000 for a year's supply, including drugs for cancer, muscular dystrophy and other genetic disorders.

The nonprofit Public Citizen group said in a statement that the U.S. government should be “urgently concerned” with the affordability of remdesivir.

Gilead's chairman and CEO, Daniel O'Day has previously said the company hasn’t discussed with any governments how much remdesivir will cost.

“The topic of pricing comes up once you know the medicine works,” he said.

Remdesivir, given through an IV, is being tested in at least five separate experiments, and Gilead also has provided it to several hundred severely ill COVID-19 patients in the U.S, Europe and Japan under "compassionate use" provisions. The company said Sunday it was halting that program due to an unmanageable number of requests.

The drug interferes with virus reproduction and has shown some promise in lab and animal studies against other coronaviruses that cause similar diseases, MERS and SARS. It was also used briefly in some Ebola patients in Congo.

For most people, the new coronavirus causes only mild or moderate symptoms, such as fever and cough. For some, especially older adults and people with existing health problems, it can cause more severe illness, including pneumonia. The vast majority of people recover.

Day said earlier this month at a press conference with other drug industry executives that his company has been working on the drug's development for a decade. He said Gilead has spent “really billions of dollars” developing the drug and plans to spend even more to scale up manufacturing facilities at Gilead and its partners.

Gilead didn’t respond to questions seeking more details about the company’s spending on remdesivir, including whether the figures used by O’Day included the U.S. government money spent on research by federal scientists and grants to universities.