As a high school senior, Hwang Yu-mi went to work bathing silicon wafers in chemicals at a Samsung factory that makes computer chips for laptops and other devices. She died of leukemia four years later. 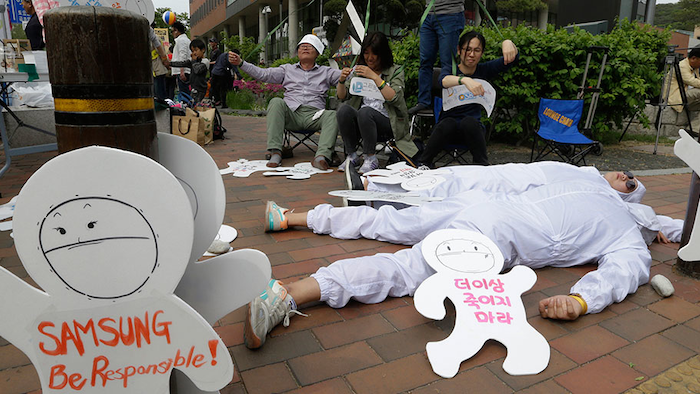 SEOUL, South Korea (AP) — As a high school senior, Hwang Yu-mi went to work bathing silicon wafers in chemicals at a Samsung factory that makes computer chips for laptops and other devices. She died of leukemia four years later.

When Hwang sued after his claim for government compensation was denied, he struggled to get details about the factory environment. Samsung did not release that information to worker-safety officials.

An Associated Press investigation has found South Korean authorities have repeatedly withheld from workers and bereaved families crucial information about chemicals used at Samsung's computer chip and liquid crystal display factories. Sick workers need access to such data through the government or courts to apply for workers' compensation. Without it, government rejections are common.

In at least six cases involving 10 workers, the justification for withholding the information was trade secrets.

South Korean law bars government agencies from withholding public health and safety-related information because of trade-secrets concerns, but there are no penalties for violations.

Samsung no longer omits lists of chemicals used on production lines from reports, as it did in Hwang Yu-mi's case. But officials have withheld details about exposure levels and how chemicals are managed.

"Our fight is often against trade secrets. Any contents that may not work in Samsung's favor were deleted as trade secrets," said Lim Ja-woon, a lawyer for 15 sick Samsung workers.

Lim's clients have been unable to see full, third-party reports on factory inspections and have accessed only excerpts of some independent inspections in some court rulings, he said.

Samsung says it has never "intentionally" blocked workers from accessing information and that it is transparent about all chemicals it is required to disclose to the government. It said in a statement that information disclosure was never "illegally prevented."

"We have a right to protect our information from going to a third party," Baik Soo-ha, a Samsung Electronics vice president, told the AP.

Government policies have generally favored Samsung and other corporate conglomerates that powered South Korea's rapid industrialization after the 1950-53 Korean War.

Officials say corporate interests take priority, evaluating trade secrets claims is difficult, and they fear being sued for sharing data against a company's will.

"We have to keep secrets that belong to our clients," said Yang Won-baek, of the Korea Occupational Safety and Health Agency, or KOSHA.

The worker safety group Banolim has documented more than 200 cases of serious illnesses including leukemia, lupus, lymphoma and multiple sclerosis among former Samsung semiconductor and LCD workers. Seventy-six have died, most in their 20s and 30s.

Since 2008, 56 workers have sought occupational safety compensation from the government. Only 10 won compensation, most after years of court battles. Half the remaining claims were rejected and half remain under review.

Families of the victims often deplete their savings and sell their homes to pay hospital bills. Some workers end up incapacitated and unable to work.

Left with few options, more than 100 families accepted a compensation plan Samsung proposed last year, but many rejected it.

Hwang Sang-gi said Samsung offered him 1 billion won ($864,000) in 2007 to not pursue a case over his daughter's death. He said no, founded Banolim and joined four former Samsung semiconductor workers suffering from various blood cancers in filing for workers' compensation.

In 2014, seven years after Yu-mi's death, an appeals court affirmed a lower court's finding of "a significant causal relationship" between Yu-mi's leukemia and her likely exposure to benzene, other chemicals and ionized radiation at work. Hwang Sang-gi received nearly $175,000 from the government.

Samsung's CEO issued a formal apology in 2014, though some ailing workers consider it inadequate. The company promised to give workers documents they need to seek compensation, and this year launched a committee to oversee independent inspections of some factories.

Workers and their bereaved families want more a complete apology and changes in how compensation is awarded. Hwang and other campaigners regularly protest outside Samsung's Gangnam complex. They view suing Samsung as a poor option; the standard of proof would be higher than in workers' compensation cases, and they couldn't seek punitive damages.

They also say it remains difficult to get details about working conditions.

Labor ministry official Goo Ja-hwan said the government usually accepts companies' requests to keep details secret. "We cannot evaluate whether things that companies have hidden as secrets are real trade secrets or not," he said.

Baskut Tuncak, the U.N. special rapporteur on hazardous substances and waste, said in a phone interview that such policies don't protect workers.

"That simply allows their abuse of the system where information about hazardous substances is hidden from the public from victims under claims of confidentiality," he said.