Just when Boeing really needs its engineers, they're voting on whether to strike. It's bad timing for Boeing. The aircraft maker is working around the clock to solve battery problems that have grounded its 787s around the world, and unionized engineers are a big part of that effort. 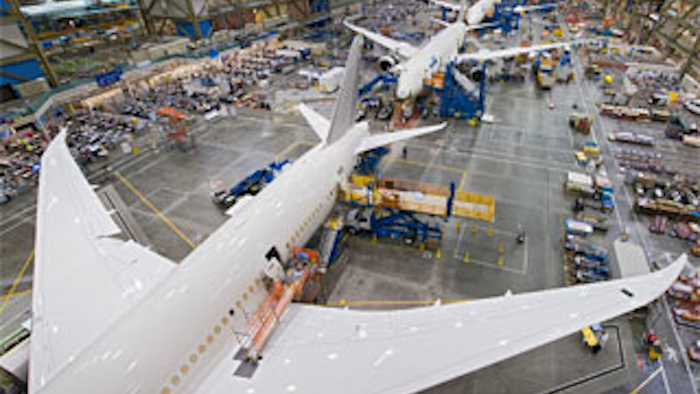 Just when Boeing really needs its engineers, they're voting on whether to strike.

It's bad timing for Boeing. The aircraft maker is working around the clock to solve battery problems that have grounded its 787s around the world, and unionized engineers are a big part of that effort.

The vote begins Tuesday and runs through Feb. 19. The union has recommended that its members reject Boeing's contract proposal, hoping the company offers something better, or they may strike.

The strike threat is growing just as Boeing is dealing with a host of other problems. It must mollify airlines frustrated about buying a $200 million plane they can't fly, and it needs to fix the battery problem. U.S. regulators have launched an open-ended review of the 787's design and construction. And Boeing needs to speed production of the 787 and other planes.

Last month a battery on a parked 787 caught fire in Boston. Then on Jan. 16, another 787 had to make an emergency landing in Japan after another battery problem. All 50 787s that Boeing had delivered so far are grounded until the issue is solved.

Boeing has said that fixing the 787 is taking its full effort.

The effort includes hundreds of members of the Society of Professional Engineering Employees in Aerospace, the union's executive director, Ray Goforth, said in an interview on Wednesday. The union represents some 23,000 workers at Boeing.

Jim McNerney, Boeing Co.'s chairman and CEO, was asked on Wednesday whether a SPEEA strike would impact the investigation into the battery issues.

"I think we're going to have enough experts available to keep looking at this issue if it goes that far," McNerney said after the company reported financial results.

Goforth said the grounding ""shifted a lot of leverage to us." But workers wanted to keep things simple and not take advantage of Boeing's situation, he said, so they dropped the improvements they had been seeking in favor of extending the contract.

Boeing's counter-offer — the one the union will vote on — mostly does that. However, Boeing wants to drop traditional pensions for future hires, replacing them with 401k plans. Boeing also declined to make two changes that SPEEA wanted that it said would help preserve current retirement benefits. The union sees those as major give-backs that mean the offer should be rejected.

Boeing calls the proposed contract its "best and final offer."

The engineers and technical workers in SPEEA work on plans for new planes, as well as solving problems that arise on the factory floor. When a hole gets drilled a millimeter off, or a part is a little too big or too small, a SPEEA member figures out the fix.

The union believes a strike would shut down Boeing production lines in Everett, Wash., where its big planes are made, as well as Renton, Wash., where it cranks out more than one of its widely-used 737s every day. The factory-floor assembly work is done by the members of the International Association of Machinists.

Goforth believes a strike would also shut down Boeing's new, non-union plant in North Charleston, S.C., which makes 787s in addition to those assembled in Everett. That's because much of the engineering work on the South Carolina planes are done by SPEEA members in Washington, or who are flown in on assignment to South Carolina, he said.

Boeing isn't saying whether it would keep the plants running through a strike, but it has contingency plans. "We of course don't want a strike," spokesman Doug Alder Jr. said.

Labor strife has impacted the 787 before. The Machinists walked out in 2008, contributing to a three-and-a-half year delay in delivering the first 787. It was also one factor in Boeing opening the plant in South Carolina, where laws make it more difficult to unionize.

The Machinists approved a new, four-year contract in December 2011. Wall Street welcomed the labor peace, and Boeing shares jumped 12 percent in the month after the deal was announced.

Boeing has posted a profit of about $4 billion each in 2011 and 2012. In December it said it would boost its dividend to shareholders.

"Boeing's big problem, of course, is that it's doing well" and union members want to be rewarded, said Gary Chaison, a professor of industrial relations at Clark University.

Still, Chaison thinks a strike will be avoided. The things they're fighting over — pensions and other retiree benefits — can be negotiated, he said. And, with all the company's other issues right now, "Boeing wants this off the table."