Pro-union workers said Tuesday that Nissan Motor Co. has threatened to close its Canton assembly plant if workers vote for the United Auto Workers to represent them, though the company denies such threats. Such threats would violate federal law, which bars managers from telling employees they'll close a plant in retaliation for a pro-union vote. 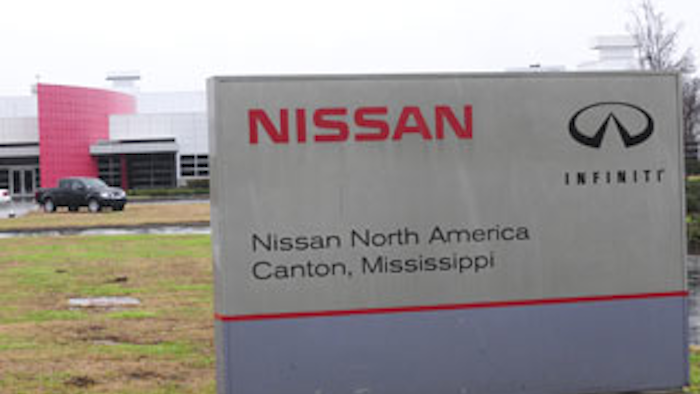 JACKSON, Miss. (AP) — Pro-union workers said Tuesday that Nissan Motor Co. has threatened to close its Canton assembly plant if workers vote for the United Auto Workers to represent them, though the company denies such threats.

Such threats would violate federal law, which bars managers from telling employees they'll close a plant in retaliation for a pro-union vote.

"I think the UAW's allegation that we've threatened and intimidated our Canton employees is simply not truthful," spokesman David Reuter said. "Nissan follows the law and always has."

Union supporters, aided by prominent black ministers and actor Danny Glover, held a rally Tuesday at Tougaloo College to criticize the company. The UAW has been trying to unionize the 5,200-worker plant for years, but no petition for an election has been filed.

In the meantime, the union is trying to push the Japanese automaker to allow it inside the plant to present its case to workers, saying Nissan is running an unfair anti-union campaign. American unions have increasingly focused on such calls for fairness or company neutrality in union elections as they struggle to stanch member losses.

Morris Mock, a Pearl resident who works at Nissan, said that in group meetings, company managers implied the factory might close. However, he said that a manager was more direct in a one-on-one meeting, saying "They're going to move this factory away."

"In the one-on-ones, they can say it," Mock said. It's just their word against mine."

If the allegations were true, Reuter asked, why hasn't a UAW supporter filed a complaint with the National Labor Relations Board? That body is charged with enforcing federal labor law.

Kathleen McKinney, the director of the NLRB's New Orleans office, said the board received two unfair labor practice complaints in late summer. Neither of them dealt with a threat of closing the plant. McKinney said both complaints were investigated and dismissed in September after the board found no proof. No other complaints are pending.

Reuter said that twice in 2012, managers talked to employees "about what it means to be unionized."

"This was in no way intimidation," he said. "It's not a threat."

One issue in the vote is Nissan's use of contract workers to perform many tasks. Employees who work directly for Nissan say they make much more than such contractors, many of whom were fired during the recession. Reuter refused to say what share of the 5,200 workers are employed directly by Nissan and how many work for contractors.

Speakers Tuesday repeatedly appealed to the heritage of the civil rights movement, noting that historically black Tougaloo College was a bastion of the fight for black rights in Mississippi.

"Dr. King said the best anti-poverty program he knew was a union," said Glover, who has repeatedly appeared in support of pro-union workers.

Student members of the Mississippi Student Justice Alliance said they were discussing the case with students at historically black colleges outside the state. They said Nissan has targeted young auto buyers, and that a pro-union youth movement would be effective.

U.S. Rep. Bennie Thompson, D-Miss., has voiced support for the union. An outside group supporting the union, the Mississippi Alliance for Fairness at Nissan, is chaired by Rev. Isiac Jackson, head of Mississippi's largest black Baptist denomination.

Mock said he's signed a card requesting a union election, but it's unclear if the UAW is close to the 30 percent required to force a vote. Unions often wait until a majority of workers or more sign cards to file for an election.

"There are hundreds of people who support us in the plant in what we're doing, but because of the fear from the videos and the attitude of management, it's making it hard for us," he said.