In Wisconsin, Civil Service Change Is Another Labor Setback

Just days after Gov. Scott Walker dropped out of the race for the GOP presidential nomination in September, Republican legislators introduced a bill to revamp Wisconsin's civil service system. 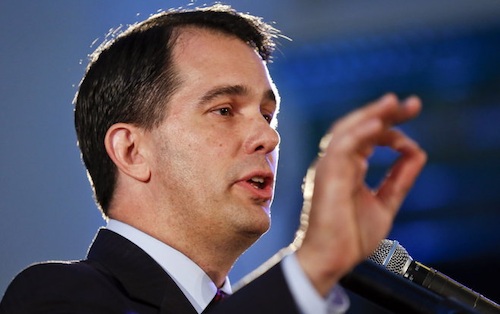 A handful of states have recently rolled back civil service protections. The rules are designed to keep officials from handing out government jobs as rewards to their political allies. But some officials say they lead to inefficiencies, offer little incentive for hard work and unfairly protect employees who behave badly.

Just days after Walker dropped out of the race for the GOP presidential nomination in September, Republican legislators introduced a bill to revamp Wisconsin's civil service system. Walker is poised to sign the measure within the next two weeks despite Democrats' complaints that the changes will open the door to cronyism.

The bill marks another in a string of labor policy victories for Walker, who has made rewriting employment law his claim to fame. In 2011 he authored a bill that all but eliminated public workers' union rights, becoming a national GOP star in the process. Last year he signed a bill making Wisconsin a so-called right-to-work state where private workers can't be forced to join a union. This past summer he signed a state budget eliminating requirements that local governments pay workers on government projects the prevailing wage for such work.

"Wisconsin is the place where all things good for labor have gone to die," Paul Secunda, who directs the labor and employment law program at Marquette University. "You want the 30,000-foot view? It looks like a bomb went off in Wisconsin in regards to workers' rights."

The new bill follows the lead of legislation that Arizona, Tennessee and Colorado enacted in 2012 scaling back civil service protections. In Washington, congressional Republicans last year launched an effort to remake the federal system as well. Supporters of change say government should handle its employees more like a business.

The Wisconsin measure would centralize hiring decisions within Walker's Department of Administration, eliminate exams for job applicants, extend probation periods and create merit bonuses. It would eliminate bumping rights, which allow senior employees to avoid layoffs by forcing less experienced workers out. And it would define what amounts to just cause for discipline. The changes would affect about 30,000 state workers.

But Democrats say the changes would open the door to corruption.

"We shouldn't go back to the days of hiring people because of who they know rather than what they know," said Sen. Fred Risser, a Madison Democrat whose grandfather wrote the 1905 bill establishing Wisconsin's system.

Walker's administration said in 2014 he had no interest in changing the system, but he quickly threw his weight behind the bill last year and traveled the state to promote it. One of the stories he told was how the current rules protected two railroad commission workers caught having sex on state property from being fired. The workers actually could have been fired for just cause under the current system, but records show no one pushed for their termination.

In September, Walker issued a statement calling the legislation "common-sense reforms" that would give state agencies tools to recruit good people and fire "the bad actors who abuse the system."

AFSCME Council 32, the labor union that represents state workers, didn't respond to a message seeking comment on the bill.

Senate Republicans put the finishing touches on the bill Wednesday, passing it on a party-line vote and sending it to Walker. The governor said Friday he plans to sign the bill in a week or two. When he does it will mark yet another defeat for labor, employment experts said. Without exams to ensure applicants have some competence, fears of cronyism creeping into state government are legitimate, they said.

"The rationale the governor and Legislature is giving is they're streamlining the process, making positions easier to fill," said Will Jones, a University of Wisconsin-Madison professor who specializes in labor history. "The question is, do you want to just fill them or put the most qualified people in those positions?"