Boeing Co.'s engineers have accepted a new four-year contract while technical workers rejected their offer and voted to authorize a future strike. The union representing both groups had recommended rejection of the contract because it would not provide pensions to new employees. They would have a 401k retirement plan instead. 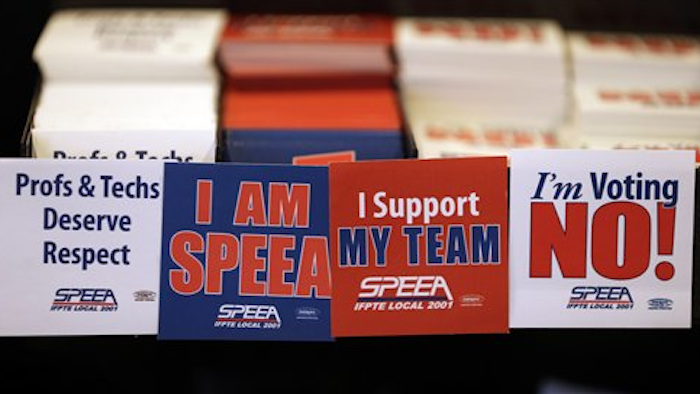 The union representing both groups had recommended rejection of the contract because it would not provide pensions to new employees. They would have a 401k retirement plan instead.

The union called that unacceptable, but the Chicago-based aerospace company said the change was important to its future.

The vote tallied late Tuesday came as the company is trying to solve battery problems that have grounded its new 787s.

The engineers and technical workers in the union work on plans for new planes and solve problems that arise on the factory floor. The two units bargain at the same time, but their contracts are separate and independent agreements, the union noted.

While a strike by the technical workers is not imminent, the vote means the negotiating team can call one at any time, said Bill Dugovich, spokesman for the Society of Professional Engineering Employees in Aerospace.

The engineers' vote means those 15,500 employees have a new contract in place, Dugovich said. Union negotiators hope to resume contract talks soon on behalf of the 7,400 technical workers, he said.

Boeing Commercial Airplanes President and CEO Ray Conner said in a statement that the company was pleased with the engineers' vote but "deeply disappointed" in the technical workers' rejection of what he called the company's "best and final" offer.

"The realities of the market require us to make changes so we can invest in new products and keep winning in this competitive environment ..." Conner said in his statement. "That's why our proposal to move future hires to an enhanced 401(k)-style retirement plan is so important, as we have repeatedly emphasized over the course of these negotiations."

Boeing spokesman Doug Alder said the company is legally obligated to have discussions with SPEEA, but he noted Conner's statement about the importance of the 401k transition for future hires.

"That remains our position," Alder said.

"With this second rejection by technical workers of Boeing takeaways, it's time for the company to stop wasting resources and improve its offer to reflect the value and contributions technical workers bring to Boeing," SPEEA Executive Director Ray Goforth said in a statement. "That way, we can avoid a strike and focus on fixing the problems of the 787 and restoring customer confidence in Boeing."

The latest labor unrest is happening as U.S. regulators launch an open-ended review of the 787's design and construction. Last month, a battery on a parked 787 caught fire in Boston. On Jan. 16, another 787 made an emergency landing in Japan after another battery problem.

All 50 787s that Boeing had delivered so far are grounded until the issue is resolved.

The union's nearly 23,000 employees are mostly in the Puget Sound region. Union leaders believe a strike would shut down Boeing production lines in Everett, Wash., where its big planes are made, as well as in Renton, Wash., where it cranks out the widely used 737.

The factory-floor assembly work is done by the members of the International Association of Machinists. The Machinists approved a new, four-year contract in December 2011, after a walkout in 2008 that contributed to a 3½-year delay in delivering the first 787.

It was also a factor in Boeing opening a plant in South Carolina, where laws make it more difficult to unionize.