Workers fired flares and paint bombs and riot police answered with tear gas in a standoff Tuesday over layoffs at a French plant for U.S. tiremaker Goodyear, amid tensions over a slump in Europe's car industry that has hurt automakers and their suppliers. 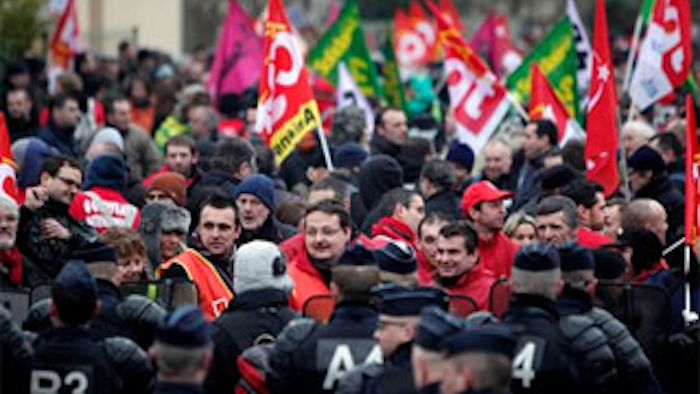 RUEIL-MALMAISON, France (AP) — Workers fired flares and paint bombs and riot police answered with tear gas in a standoff Tuesday over layoffs at a French plant for U.S. tiremaker Goodyear, amid tensions over a slump in Europe's car industry that has hurt automakers and their suppliers.

Another demonstration Tuesday targeted the headquarters of carmaker PSA Peugeot Citroen, which is laying off thousands of people. Protests over cutbacks in the industry have been a big challenge for French President Francois Hollande's government in recent months.

Goodyear Tire & Rubber Co.'s French operation announced plans last month to close a factory in Amiens in northern France, which could lead to about 1,200 layoffs. Talks with a potential buyer for the plant reportedly broke down this week.

No injuries were immediately reported.

Workers led by unions also protested Tuesday outside the Peugeot Citroen headquarters. Unions and management have been arguing for months over a company plan to close a landmark factory and lay off thousands of workers around the country.

Goodyear and its French rival Michelin on Tuesday both reported profits in 2012 but said they were hurt by Europe's slowdown.

Goodyear, which reported profit of $183 million, said Europe is dragging down the tire maker's outlook for 2013.